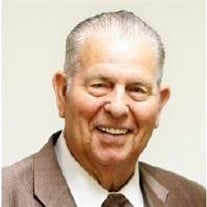 William “Bill” H. Rowe, 85, born May 21, 1934, longtime resident of Houston, Texas, went home to be with his Lord on July 24, 2019. Bill was a Christian, loving husband, wonderful father, and the ultimate example of a hard-working man. He never met a stranger, always had a smile, a hug or handshake for anyone he met. Bill had a servant’s heart and taught by example, including taking care of other family members. No matter how tired or busy he might be, he would stop and help anyone who needed it. He was a man of integrity, loyalty and strong Christian faith that he wasn’t ashamed to share. All that met him loved him. Bill loved working with his hands and had the ability to make four nothings into one something. He also believed in getting his monies worth out of anything he purchased……it only took our sweet mom 29 years to get a new, store-bought refrigerator. Bill was also known for his story telling and he would tell a story to anyone who would listen. He loved sharing memories of growing up in Galena Park, working with his dad, his years as a rigger at Armco, working offshore as a rough neck, and his adventures in Germany during his stint in the military. But, of all the stories he told, his favorite was the one about the love of his life, his girl, Glenna. Their love story lasted 63 years. Bill served in the U.S. Army as a welder during the Korean War while stationed in Germany. He started his career at Armco Steel in 1954 and completed a Machinist Apprenticeship Course in September of 1960. In March of 1964 he completed a Rigger Apprenticeship Course and was qualified to serve as a journeyman. In July of 1965, he received the Outstanding Rigger Apprentice Award at the Southern States Apprenticeship Conference in New Orleans, Louisiana. In December of 1980, he was recognized by supervisors for his leadership during the Coke Plant Outage and Rebuild. In 1981, he received a Perfect Attendance Award for maintaining perfect attendance from January to December of that year. In February of 1983, he received the Iron Man Safety Award which is a national recognition for the entire Armco Corporation that began in 1925. In August of 1983, Bill received a $1,000 award for his suggestion to improve a process or procedure within the Plant. In September 1983, he received a second Employee Suggestion Major Award. He retired from Armco after 30 years of service and when the plant closed in 1984. In 1986, Bill started a second career with the Galena Park Independent School District in the maintenance department. While at Galena Park he received a Certificate of Recognition for Outstanding Performance in Educational Maintenance in September of 1989; a Certificate of Achievement for his outstanding contributions to the GPISD Summer “94” Maintenance Program; and was awarded Galena Park ISD 1994 Maintenance Man of the Year. After retiring from GPISD in 1999 at the age of 65, he ran a successful stump grinding business with his son, Kent until 2014. Bill was a member of the Masonic Lodge and in October of 2011 received recognition for 50 years as a Master Mason. He is proceeded in death by his father, Jasper M. Rowe, Sr., mother, Katherine Agatha Garrett Rowe, Stepmothers Gladys Rowe and Betty Rowe; siblings Marion Rowe, Jr. and wife Rosemary, Katherine “Kay” Baca, Anna Steeley and husband Douglas, and James Wendell Rowe. He is survived by his loving wife of 63 years, Glenna Rowe, sister Malana Shumaker and brother in law, Curt Baca. Four children, Brenda Rowe Gunder, Ronda Smith, and husband Blanton Smith, Del Ray Rowe, and wife Judy Rowe, Kent Rowe, and wife Maria Hightower Rowe. Bill was blessed with grandchildren Corey Gunder, and wife Becca Gunder, Valerie Smith, Justin Rowe, Seth Rowe, and wife Kacie Rowe, Paul Rowe, and wife Jamie Rowe, Timothy Rowe, and wife Jennifer Rowe, Abigail Rowe, Anna Street, and husband Jonathan Street; Charles Edward Hightower, and wife Beatriz Hightower, Daniel Hightower, and wife Jessica Hightower, Hunter Ware, and husband Cullen Ware, Michael Hightower, and wife Paige Hightower. Bill was also richly blessed with great-grandchildren Samantha Campos Gunder, Raylie Campos Gunder, Wyatt Rowe, Maddie Rowe, soon to arrive great granddaughter Aurora Rose Rowe, soon to arrive great granddaughter Camila Marie Rowe, Damon Hightower, Mykala Hightower, Manny Hightower, Myla Hightower, Caleb Hightower, Lexi Hightower, Ezra Ware, Eli Ware, nieces, nephew and many loving friends and acquaintances. We would like to offer a special note of thanks to a wonderful caregiver Cajuana “CoCo” Jackson who lovingly cared for Bill and Glenna; the kind staff and administration at Swan Manor Assisted Living Facility and the outstanding and committed staff from Heart to Heart Hospice. Services for Bill will be held at San Jacinto Funeral Home & Cemetery located at 14659 East Freeway, Houston TX 77015.

The family of William Herman Rowe created this Life Tributes page to make it easy to share your memories.

Send flowers to the Rowe family.