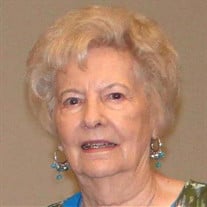 There was a reunion in heaven on Tuesday morning November 7, 2019 as Jesus welcomed Vera Mae Carter into glorious eternity. The earthly pain and struggle came to an end but unfortunately, so did hearing her words of, "I love you." She is survived by sons Glenn with wife Kay Carter of Galena Park; Gary with wife Theresa Carter of Houston and Ricky Carter of Danbury, Texas. Grandchildren are Timothy with wife Jamie Carter of Mont Bellvieu; Karrah with husband Troy Robinson of Hays, Kansas; Mindi with husband Brett Boone of Kingwood; and Stacey Carter with husband Danial Shams of Nashville, TN. Great grandchildren are Kylie, Ashley and Addilyn Carter; Jacie and Gregory Robinson; and Dylan and Reagan Boone. Vera Mae Chambers was born on July 4, 1929 in Cullman, Alabama to parents Jessie and Irene Chambers. She was the big sister to James Troy Chambers. Growing up in rural Alabama during America's Great Depression of the 1930s, her family toiled long and hard in the cotton and crop fields on land owned by other farmers; thus were known as sharecroppers. Life was hard but the companionship of many aunts, uncles and cousins provided much love, fellowship and laughter. Transportation during her early years, other than walking or hitching a ride, consisted of riding in a mule-drawn wagon to town or church. The scarce work that could be found during the depression forced her family to move from farm to farm in search of any kind of employment. They were so destitute that all of their possesions would easily fit into the back of the wagon or trunk of a relative or friend's vehicle during their many moves. When she was about ten years of age and as the economy began to improve her family moved to Gadsden, located in northeastern Alabama and fortunately her parents secured jobs at the town cotton mill, thus marking the beginning of a better life. At age 17, she married Thomas G. Carter on July 30, 1946 after serving in the U.S. Navy during World War II. She went on to complete her senior year and graduate from Emma Samson High School in Gadsden in 1947. During the spring of 1954, with sons Glenn and Gary, the family moved to Houston, Texas and settled in the area known as Woodland Acres after Tom secured employment at then Sheffield Steel, later known as Armco. In 1957 along came son Rick to complete the family. Vera was a full-time mom and home manager that loved to cook fabulous meals and desserts for her family and friends. A great part of her life was invested in attending and supporting her sons' and grandchildrens' school, church and sports activities. In 1998, Vera andTom began attending Calvary Baptist Church and immediately felt at home. Vera and Tom reached an incredible milestone on July 30, 2016 as they celebrated their 70th wedding anniversary with church members, friends and relatives at Calvary. At 90 years old, after enduring four years of pushing through the effects of failing health, she passed away peacefully at the Swan Manor Assisted Living facility in Baytown, Texas.

There was a reunion in heaven on Tuesday morning November 7, 2019 as Jesus welcomed Vera Mae Carter into glorious eternity. The earthly pain and struggle came to an end but unfortunately, so did hearing her words of, "I love you." She is survived... View Obituary & Service Information

The family of Vera Mae Carter created this Life Tributes page to make it easy to share your memories.

There was a reunion in heaven on Tuesday morning November 7,...

Send flowers to the Carter family.