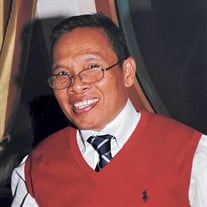 After a long and courageous battle with COVID-19, Ty Bo, pastor, husband, father, grandfather, brother, uncle, and friend, has been called home to be with his Father in heaven on February 8, 2021. Born January 8, 1946 in Cambodia to Pheap Bou and Pech Sar, Ty Bo was the oldest of 12 children, 3 of whom preceded him in death. Pastor Bo lived a life that should have been made into a movie. Growing up in a small village in Cambodia, his passion was for learning and love of country. After attaining a Baccalaureate in Literature Arts, he served as a Commander in the Cambodian National Army during the perilous conflicts in Southeast Asia. He came to the knowledge of his Creator and God during his miraculous escape from his war torn country, creating a new life for himself and his family as new Americans in the United States in 1976, then serving as a pastor in the Houston area since 1985. In his new home, Pastor Bo’s passion was ever to serve to further the Kingdom of God. During this time, not only did he work effortlessly to bring dozens of his family and friends out of the Killing Fields of Cambodia, he worked even harder to bring those he loved to a saving knowledge of Jesus Christ. For his life’s work can be seen in the words of his Lord, Jesus Christ, as thus: “Father, I desire that they also, whom you have given me, may be with me where I am, to see my glory that you have given me because you loved me before the foundation of the world.” John 17:24 Pastor Bo’s life can be summed up in one phrase: He loved and was loved. As such, he was known to those who knew him as incessantly smiling, effortlessly generous, and eternally loving. His transition to his eternal home will definitely leave a void among those who love him. Pastor Bo is survived by his wife of 49 years, Eang Kim, daughter, Sotheary and her husband, Rob, daughter, Sotheara and her husband, Cong, grandchildren, Taylor, J.R., Caleb and his wife Heather, Caylen, Cameron, and Camden, 8 brothers and sisters, and multitudes of nieces and nephews, cousins, & friends.

After a long and courageous battle with COVID-19, Ty Bo, pastor, husband, father, grandfather, brother, uncle, and friend, has been called home to be with his Father in heaven on February 8, 2021. Born January 8, 1946 in Cambodia to Pheap Bou... View Obituary & Service Information

The family of Ty Bo created this Life Tributes page to make it easy to share your memories.

After a long and courageous battle with COVID-19, Ty Bo, pastor,...

Send flowers to the Bo family.