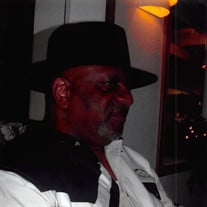 Robert A. Finley, Sr. went home to be with the lord on Tuesday, May 19th, 2020 at the age of 72 years old. He was born into the union of Bob Lanier Finley and Frances Louise Register Finley on October 28, 1947. He was a congenial man with an easy-going personality that was displayed in his kind nature. Robert grew up in Old Town Community of Palestine, Texas. Robert attended and baptized at Mount Vernon AME Baptist Church as a child. As a young kid, Robert attended Frederick Douglas Elementary where his Great-Grandfather, William Freeman, was the principal in 1909 and his Great-Uncle, Byron Freeman, was the principal at his time of attendance. Robert graduated from A. M. Story High School (named after his cousin, Alonzo Marion Story), in 1966 where he was on the football team and a member of the FFA. After high school, Robert married his first wife, Doris Hamilton in 1968. In their union they had three children: Andre Lanier (Lynn), Cindy Cecelia (CiCi), and Robert Anthony Jr., (Robbie). Shortly after, Robert enlisted in the U.S. Navy where he did a tour of duty in the Vietnam War on the USS Constellation. He proudly served as one of the two only African Americans in his Naval Unit. Robert returned to Palestine and began a career with the Missouri Pacific Railroad in 1971 following his grandfather (Freddie Finley) and his father (Bob Finley) footsteps. Robert relocated to Houston, Texas to continue his career as an Engineer with the Union Pacific Railroad after 38 years of stellar service and retired in 2009. Robert later remarried Debra White Finley in 2008 (whom he proceeds in death). Robert lived out his retirement listening to “old school” music, talking on the phone with his brother, Don Finley, reliving his Naval and railroad experiences, and watching his old westerns with his wife on television, and spending time with family and friends during gatherings and events. He especially enjoyed spending time with his grandchildren, nieces and nephews. Robert was preceded in death by his parents, Bob and Frances Finley. He leaves his wife Debra D. Finley to cherish his memory, his children, Andre Lanier Finley, Cindy Cecelia, and Robert Finley, Jr. his stepchildren, Tanchel White (Christopher Boone, Fiancé), Kareem White, and Andrea “Tweety” Landry. Robert is also survived by his grandchildren: Xavion, Christian, Kelci, Robin, Raven, Jailen, Dylan, Ariah, and Alayiah, also his sister and brother, Lillie Robinson (James) and Donald Finley (Julie). He is also survived by his aunt, Jeanette Tatum of Beaumont, TX., nieces and nephews: Januari and JoAnna Robinson (Haley), Ashley Finley Burns (Milton), Aaron Finley (Rachel). Robert also leaves behind a host of family and friends to keep his memory alive.

Robert A. Finley, Sr. went home to be with the lord on Tuesday, May 19th, 2020 at the age of 72 years old. He was born into the union of Bob Lanier Finley and Frances Louise Register Finley on October 28, 1947. He was a congenial man with an... View Obituary & Service Information

The family of Robert Finley created this Life Tributes page to make it easy to share your memories.

Robert A. Finley, Sr. went home to be with the lord on Tuesday,...

Send flowers to the Finley family.