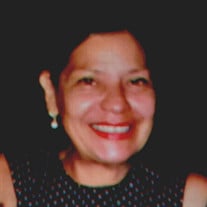 Mary Rita Sambol, 68, of Houston, Texas, went home to be with the Lord on Sunday, July 5, 2020. Born February 11, 1952, she was the daughter of the late Lino B. Ramirez and his wife, the late Sara Sandoval Ramirez. The youngest of four children, Mary was born and raised in Port Lavaca, Texas until moving to Houston in the 1960s with her family. Her father, a master welder, her mother, a domestic engineer, and her three older brothers, Lino, Julio, and Rey doted on her as the baby girl of the family. Mary considered her greatest accomplishments in life to be her children and being their mother her greatest role. When she had her first child, Domonique, at a young age, she wasn’t prepared for all that raising a baby boy entailed. But the early bond formed between mother and son was made all that much stronger through the beautiful struggles they endured as she navigated the ups and downs of being a single parent. That deep connection with her son continued throughout her entire life and his love and devotion carried her through the most challenging and difficult times, especially through the last few years of her life that were marred with illness and health issues. It was just the two of them for a few years until Mary met the love of her life, Robert Gene Sambol in 1975. They married in 1977 and Robert became a father figure to Mary’s young son. Soon after, Mary and Robert welcomed an angel into their lives, a daughter Jennifer Lynn and then six years later, another angel, daughter Brooke Lenee. After Robert’s unexpected death in 1986, Mary once again found herself a single parent, raising three children on her own. To earn money for her family she took a job working in the deli at the Woodforest Kroger where she loved serving her customers for 18 years until her retirement in 2015. Though she worked hard to make ends meet, she always put her children first. She taught her son how to be a man but also showed him by example how to love. She gave her daughters the gift of laughter and joy and showed them every day how to live life to the absolute fullest no matter the difficulties they faced or the obstacles they had to overcome. Mary lit up a room, she danced like no one was watching, and found joy in the smallest of things. One red rose in a bed of white lilies, she stood out for her smile, her laughter, and her vivacious spirit. She was strong and kind, patient and loving, generous and selfless. All who knew her will forever be touched by her steady grace and she will live in the hearts of her family and friends… always. Mary is survived by her devoted son, Dominique Hermez, her two angels, daughters Jennifer and Brooke Sambol, and her beloved grandson, Isaiah Bishop Hermez, many brother and sister in laws, dozens of nieces, nephews, and cousins, all whom she cherished. “Trust in the Lord with all your heart. Lean not on your own understanding. In all your ways acknowledge Him and He will direct thy path.” Proverbs 3:5 Due to current Covid guidelines, a limited number of close family and friends will be received by invitation at a viewing on Sunday, July 12th from 11am – 3pm at the San Jacinto Funeral Home and Memorial Park at 14659 East Freeway in Houston. A service will be held immediately following the viewing at 3 pm. Masks are required and social distancing will be enforced. All family and friends are invited to remember Mary at the Inurnment and celebration of her life at her final resting place in the San Jacinto Memorial Garden on Saturday, July 18 at 2:30 PM.

Mary Rita Sambol, 68, of Houston, Texas, went home to be with the Lord on Sunday, July 5, 2020. Born February 11, 1952, she was the daughter of the late Lino B. Ramirez and his wife, the late Sara Sandoval Ramirez. The youngest of four children,... View Obituary & Service Information

The family of Mary Sambol created this Life Tributes page to make it easy to share your memories.

Send flowers to the Sambol family.