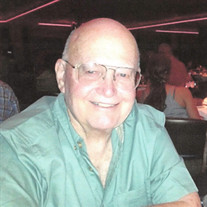 Louis A. Oswald, Jr. passed away Sunday, February 24, 2019. He was 81. An only child, he was born to the late Louis Alfred Oswald and Betty Jeanne Bennett in San Antonio on July 1, 1937. In addition to graduating from Moye Military School, Castorville, Archbishop John Carroll High School in Washington, D.C., and St. Mary’s University in San Antonio, he served with the U.S. Army in Maryland, Virginia, Vicenza, Italy, and Texas. At St. Mary’s University, he received a Bachelor of Arts degree with a major in Geology, and an ROTC commission with the U.S. Army. After working for a few oil companies, he founded his own consulting firm in 1980. He enjoyed his work immensely and retired only because of poor vision. He was a member of the Houston Geophysical Society, American Association of Petroleum Geologists and the Society of Exploration Geophysicists. In 1962 he married the former Mary Grace Wilhelm of San Antonio. In addition to his wife, Oswald is survived by three sons: Louis A. Oswald, III, Kelly V. Oswald (Stacey) and Brent A. Oswald; grandchildren: Sara Jo Oswald, “Ali” Alexandra Grace Oswald, Louis A. Oswald, IV, Jackson Ray Oswald, David Brady Oswald and Avery Joseph Oswald. Two sons: Brett Christopher Oswald and Blair Jeremy Oswald preceded him in death. He has been a member of St. Dominic’s Catholic Church since 1966 where he was a youth director and lector. For many years he worked with Cub Scouts Pack 707 in the Woodforest subdivision. He was an avid outdoorsman and particularly enjoyed swimming, fishing, hunting, and camping with his sons. In the kitchen he liked to create his own version of a recipe, was an amateur wine maker, and had the patience to watch his seeds grow in the garden. Besides traveling, Oswald enjoyed camping at his ranch in Goliad and spending time at his vacation homes in Rockport and the Texas Hill Country. In the last few years he spent many hours listening to books courtesy of National Library Service for the Blind and Physically Handicapped. In lieu of flowers, donations made be made in Oswald’s name to St. Jude Children’s Research Hospital, 501 St. Jude Place, Memphis, TN 38105. Funeral Mass will be Saturday, March 2, 2019 at 11AM at St Dominic Catholic Church, 8215 Reservoir Street, Houston, TX 77049. Burial will be in San Fernando Cemetery II, San Antonio, at a later date.

Louis A. Oswald, Jr. passed away Sunday, February 24, 2019. He was 81. An only child, he was born to the late Louis Alfred Oswald and Betty Jeanne Bennett in San Antonio on July 1, 1937. In addition to graduating from Moye Military School,... View Obituary & Service Information

The family of Louis Alfred Oswald Jr. created this Life Tributes page to make it easy to share your memories.

Send flowers to the Oswald family.