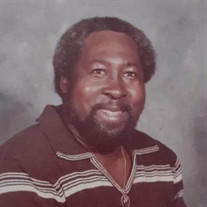 Joseph Clement, also known as Master Joe, was born in San Fernando, Trinidad and Tobago to the parents of May Hemlee and Mr. Clement. Joseph was one of nine children. Joseph was the light and strength of the family and anyone that crossed his path. As a young adult Joseph moved to St. Croix to work in the construction field. As the years went by Joseph migrated to New York in the United States. Joseph became a father to Penelope Joseph. Joseph then moved to Texas, his permanent home, where he became a father to more children Shereka Houlder-Clement and Joseph CJ Clement. Joseph was no stranger to hard work. He had strong work ethics and believed strongly in being a good provider for his family. Joseph also married his wife Cheryl Huggins in October of 1997. Joseph worked for Wolferson Electric until he retired in 2018 but continued to provide for his family. Joseph had a great love for sports, history, and politics, and chatting with family and friends. Joseph was always ready to pose to take pictures and was always ready to take pictures. He was always the sharpest dressed person in the room along with his many of gold necklaces and rings. Joseph loved to have a good time and was always the life to any party. For Joseph, just being with his family meant the world to him. At such an untimely yet divinely orchestrated departure, Joseph exited this earthly realm on August 13, 2020 and entered into the arms of his heavenly father, leaving behind a lifelong legacy for those to follow. A smile as bright as a ray of sunshine, a heart as pure as gold Joseph Cyril Clement was preceded in death by his Mother, Father, and siblings. Joseph leaves to cherish in his memory his wife Cheryl Clement, daughter Shereka Houlder-Clement (daughter in law Candace Webb), Son Joseph CJ Clement, daughter Penelope Joseph, grandchildren Zyialah, Zyimiah, Ashante, and Tia. Three brothers Steve, Clyde, and Michael. Two sisters Claudette and Maureen.

Joseph Clement, also known as Master Joe, was born in San Fernando, Trinidad and Tobago to the parents of May Hemlee and Mr. Clement. Joseph was one of nine children. Joseph was the light and strength of the family and anyone that crossed his... View Obituary & Service Information

The family of Joseph Clement created this Life Tributes page to make it easy to share your memories.

Send flowers to the Clement family.