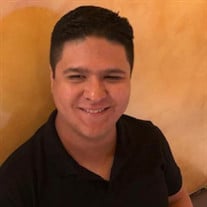 Jonathan Godinez was born August 25, 1990 and raised in Galena Park, TX. The Godinez family are deeply saddened with the untimely loss of their incredibly special son. He was a compassionate loving son, respectful, and treated everyone equally. He had no bad words in his vocabulary and never spoke ill of others due to his strong Faith. He attended Galena Park High School and was a proud member of the Gold Band playing the Saxophone. As a Gold Band member, he met many classmates that immediately became his devoted friends and was overjoyed with the pleasure of interacting and performing with them. He continued his 3rd grade friendship to the present with his best friend, Pete Munoz. Their friendship is one that continued after high school. Jonathan enjoyed listening to music and was an avid movie watcher. He was an enthusiast of The Oscars Academy Awards, The Golden Globe Awards, and the Screen Actors Guild Awards often predicting the honorees by categories and his selections were on point. He loved to play Trivia games and his family and friends were in awe of all that he knew. Jonathan was a devoted Texans fan and enjoyed watching the Houston Rockets and Astros, and most notably was fond of wrestling. He met the love of his life, Melody Silva, through an unconventional method, online dating service. She was drawn to his online dating entry of being a “hopeless romantic” and she decided to take a chance and meet this “hopeless romantic”. They video chatted and she wondered if he was truly a “hopeless romantic” and if this was the case, he shouldn’t care about her appearance. She accepted the video chat with wet hair immediately after taking a shower and wore no makeup. They spoke for hours on the phone and he was in admiration of her beauty. Their first physical encounter was at UH and it was immediately followed up with a first date at the Aquarium Downtown. Jonathan beamed of excitement notifying his family of the girl he met and knew their love would evolve into a serious relationship. Four years later, their courtship developed into an amazing loving “promised” relationship. He is proceeded in death by grandparents, Sr. Arcadio and Sra. Juliana Godinez, and Sr. Roberto Villa. He is survived by his mother Juanita Godinez; maternal grandmother Sra. Rosalinda Villa; father Manuel and stepmother Sonia; stepbrother Jacob Perez; and numerous loving aunts, uncles, cousins, and friends. Jonathan will be greatly missed by his family and friends.

Jonathan Godinez was born August 25, 1990 and raised in Galena Park, TX. The Godinez family are deeply saddened with the untimely loss of their incredibly special son. He was a compassionate loving son, respectful, and treated everyone equally.... View Obituary & Service Information

The family of Jonathan Godinez created this Life Tributes page to make it easy to share your memories.

Send flowers to the Godinez family.