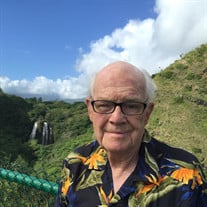 JIMMY MARION WHITE Jimmy Marion White, 88, died surrounded by family at his residence on December 7, 2020. He was born July 4, 1932 in Oden, Arkansas, the son of George Washington White and Cleo Dely (Sanders) White. Following his graduation from Oden High School, Jimmy received his Bachelor’s of Education from Henderson State University and went on to serve three years in the U.S. Army in Alaska. He then graduated with a Masters in Education from East Texas State College in August, 1960 and married his college sweetheart, Jewell Martin, in 1953. Jimmy was a distinguished member of the community as well as a beloved high school principal for many years. He and Jewell celebrated 62 years of marriage before her death in 2015. In addition to his parents, he was predeceased by his two brothers - Harmon White, of Dallas, and S.D. White of Fort Smith, Arkansas. He was also predeceased by three sisters - Edith White of Oden, Arkansas, Edna Dutton, of Dallas, and Mary Lou Hopper, of Tulsa, Oklahoma. He is survived by his son, James and his wife Meta, of Spanish Fort, Alabama, Jerry and his wife Chris, of Moss Hill; daughter, Jacque Reynolds of Houston; three grandchildren, Danielle James, Jessica Lubianski, and Johnna Davison; seven great-grandchildren, Cheyenne, Levi, Peyton, Paxton, Adele, Jordan and Emily. Visitation and funeral services will be held at Northeast Houston Baptist Church, 18000 W Lake Houston Pkwy from 10 a.m. to 12 p.m. on Monday, December 14. Immediately following will be a service of remembrance from 12 p.m. to 1:30 p.m. at the same location. In lieu of flowers, those who wish to remember Jimmy in a special way may make a donation online to the American Kidney Fund at https://www.kindeyfund.org.

The family of Jimmy Marion White created this Life Tributes page to make it easy to share your memories.

Send flowers to the White family.