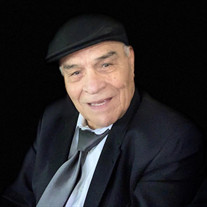 Hector Jesus Rocha Caballero passed away peacefully on August 15th, 2020 at age 83 in Houston, Texas. He was born on April 5th, 1937 to parents Jesus Rocha Hernandez and Juanita Caballero Rosales in Monterrey, NL, Mexico. He was a tough but charismatic spirit which was infectious to those around him. His playful nature kept him young at heart, and he could generally be heard talking about how his ‘karizma’ (emphasis on ‘izma’) was his superpower. He loved the respect from the community and reveled in the ability to hang out with other community/business leaders. Always an energized spirit, he never slowed down, fighting until the end. He loved his gym, his fighters and his family. While boxing was his passion, he also was an avid “futbol” soccer fan and followed the games closely. Hector moved to Houston with his younger brother Marco Antonio “Tony” Rocha, in the 1970’s to pursue his dream of producing a pro boxing champion. He would prove to establish boxing gyms all over the city of Houston prior to settling in the North side of Houston. His passion for boxing led him to coach young fighters for four decades and owned Rocha’s Boxing Club, a gym where hundreds learned how to fight in the boxing ring. Well known in the boxing community, he taught and created great fighters that strived to make him proud. He continued to mentor, coach and train in the ring doing what he loved most until he fell ill. He is preceded in death by his parents, 2 brothers Victor Manuel Rocha and Jesus Rocha. Hector is survived by his loving wife of 42 years, Maria Elena Aviles and his three children Yvonne Rocha Contreras, Zamieleth Villasana, and Hector Rocha Jr.; sister Mirthala Rocha Hernandez and brother Tony Rocha; 4 grandchildren, Nicolas Villasana, Sophia Contreras, Olivia Contreras and Lillian Rocha. Family, friends and others whose lives Hector touched are invited to the San Jacinto Memorial Park Funeral Home, 14659 East Freeway, Houston, Texas 77015 on Friday, August 28th, 2020. Visitation is from 10 am – 1pm. Funeral will begin at 1pm followed by burial at 2:30 pm. Masks are required, temperature will be taken, social distancing maintained, and gloves are encouraged, for safety precautions. Live video streaming of funeral will also be provided. Hector Rocha has helped many troubled youths turn their lives around and for some he even gave them a place to stay through his boxing gym. His legacy will live on in the hearts and minds of everyone he reached. In lieu of flowers, the family requests that donations be made to his fundraiser to keep the gym open.

Hector Jesus Rocha Caballero passed away peacefully on August 15th, 2020 at age 83 in Houston, Texas. He was born on April 5th, 1937 to parents Jesus Rocha Hernandez and Juanita Caballero Rosales in Monterrey, NL, Mexico. He was a tough but... View Obituary & Service Information

In lieu of flowers, the family requests that donations be made to his fundraiser to keep the gym open.

Send flowers to the Rocha family.