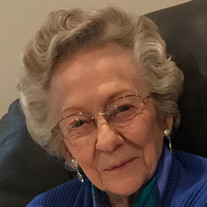 Emily Ione (Whittington) Cox completed her journey here, passing away on June 25 after 92 1/2 years of a full and wonderful life. Ione was born at home in Bremond, Texas on January 27, 1927 to Ollie (Meme) and Clifton Whittington. After moving around several Texas towns, they settled in Galena Park. It was in high school that her best friend, Polly Cox, introduced Ione to her strapping older brother, Dean who was on leave from the Army Air Corps. The match made, as they married in 1945, the year after she graduated from Galena Park. She followed Dean to El Paso and California while he was in the service, finding a room just off base each time. An only child, raised during the Depression, she was determined her children would never feel the loneliness she had. By the time her sixth child was born -- three in one year -- she had succeeded beyond her wildest dreams. She could have taught a class on Organization. She got all six kids to church on time every Sunday morning (and Sunday and Wednesday nights). When the family arrived back home, the pot roast or meat loaf she had shoved into the oven before church would be ready for lunch. When the five daughters needed dresses, no problem. Ione would go to Wiener's or Sears, buy fabric and patterns, then come home and sew. And sew. And sew. She took in a number of under-nurtured children she saw in the neighborhood and had them join the family dinner table. Whether a kind word or taking home-cooked food to people who were sick or bereaved or new parents or just down on their luck -- you name it -- she was there. Each Christmas, she would buy gifts for not just her children and spouses, but all the grandchildren -- and great grandchildren. For years, saying it was the last year she could do it -- then do it again. This past Christmas, still recovering from her September fall, was the first Christmas she didn't -- and she apologized for it. As one grandson put it, "Grandma was about serving and doing and taking care of others -- not herself." She was a devout Christian. If there ever was a more devout church attendee than Ione, they're probably encased in bronze somewhere. She was sensitive to the tamest of foul language -- even Disney movies required vetting. If you used the word "darn", you'd better be holding knitting needles. She was devout to the very end, just recently from her hospice bed softly leading a prayer that the family stay close to God and love one another. She and Dean traveled the country in their RV. She's gone to join him now, along with her mother, Ollie (Meme) Lou Hulsey. She is survived by her six children: Don Cox and wife Sue of Austin, Kay Weeks of Crosby, Sheila Cook and husband Glenn of Groveton, Brenda Rizzotto and husband Paul of Sugar Land, Linda Binder of Sugar Land, and Wanda Henderson of Crosby. In addition, Ione is survived by 16 wonderful grandchildren, 29 terrific great-grandchildren, many nieces and nephews -- and in-laws Nancy Cox of Spring, LaDon and Bobbie Cox of Pearland, and Billy and Brenda Cox of Missouri City. She loved them all dearly. Visitation will be 6:00 - 8:00 p.m. Friday, June 28, at San Jacinto Funeral Home at 14659 East Freeway (I10). Funeral services will be at Channelview Church of Christ, 1301 Sheldon Road, Channelview at 10:00 a.m., Saturday, June 29, with Richard George officiating. Interment to follow at San Jacinto Memorial Park. In lieu of flowers, the family asked that donations be made to Lifeline Chaplaincy or M. D. Anderson Hospital.

Emily Ione (Whittington) Cox completed her journey here, passing away on June 25 after 92 1/2 years of a full and wonderful life. Ione was born at home in Bremond, Texas on January 27, 1927 to Ollie (Meme) and Clifton Whittington. After moving... View Obituary & Service Information

The family of Emily Ione Cox created this Life Tributes page to make it easy to share your memories.

Customized sympathy cards. Mailed for you.