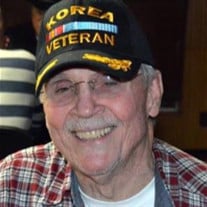 Charles Donald Gough, 85, of Houston Texas passed away Thursday, September 30, 2021 in Baytown Texas. He was born September 26, 1936 to John and Annetta Gough in Uniontown, Kentucky. Don joined the Air Force and while stationed in Sioux City, Iowa he met and married his wife of 65 years, Donna M. Hewitt on October 8, 1955. While in the Air Force he served during the Korean War. He also became an atomic veteran after serving on a top-secret mission testing the atomic bomb. After he left the Air Force, he joined the US Customs Service for an illustrious career until his retirement. During retirement he started another career teaching at Northshore High School before retiring completely. He was a proud member of the VFW and American Legion. He was a huge fan of Houston sports, and followed the Astros & Texans (Oilers), but the Kentucky Wildcats held his heart. He was a musician and singer and played every opportunity he got. Don was very popular on the local opry circuit and played regularly with his son and granddaughter. Sharing his love for country music he had started working with his great granddaughter. He is survived by his loving spouse Donna Gough; daughter, Dawn Harriman-Pounds; sons Kevin Gough wife Jan, Derrick Gough wife Frances all from Houston, TX. His sister, Loretta husband Benny Cavaliere of Huntsville, Alabama; seven grandchildren Donna, Abby, Kevin Jr., Timothy wife Lyndsey, Amber husband Donnie, Jessica husband Tommy, Dara husband Kenny. Six great grandchildren Stevie, Wyatt, Memphis, Sebastian, Jackson, Jennifer and one great great grandchild Calix, as well as a host of other family members and friends. He was preceded in death by his parents John and Annetta Gough; four brothers Vincent, Lyle, John and Joseph; three sisters Gertrude, Regina and Agnes.

Charles Donald Gough, 85, of Houston Texas passed away Thursday, September 30, 2021 in Baytown Texas. He was born September 26, 1936 to John and Annetta Gough in Uniontown, Kentucky. Don joined the Air Force and while stationed in Sioux City,... View Obituary & Service Information

The family of Charles Donald Gough created this Life Tributes page to make it easy to share your memories.

Send flowers to the Gough family.