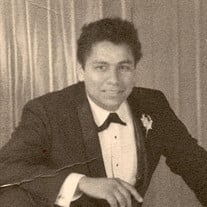 Arturo “Arthur” Diaz, Sr. (79) went to be with his Lord and Savior on Monday, February 10, 2020. On Saturday, August 3, 1940, he was the last of 14 children born to Cirilo Diaz and Maria Muniz Diaz. He attended Rusk Elementary and graduated from Stephen F. Austin High School. He was a talented dancer and won several dance competitions. Arthur’s favorite dance hall was La Terraza Night Club where he met “his lady in red”, Martha Gloria Garcia. After having to ask three times for her hand in marriage from Martha’s grandmother they finally married on April 19, 1964 at Our Lady of Guadalupe Catholic Church. They had four children Andy, Gilbert, Johnny, and Barbara. He worked most of his life as a meat cutter at Pacini’s, Weingarten‘s, Handy Andy, Sing-on, Fiesta, Randall’s, and retired with HEB. Arthur loved sports. He loved Mid-South Wrestling, WCW, and WWF. He looked forward to going to see the Astros play in the AstroDome to watch the celebration of a homerun on the fireworks scoreboard. He always watched the Houston Oilers and the Houston Texans. One of his most exciting times of his his life is when the Houston Rockets won their first championship and of course the back to back victory the following year. He spent time with his family going to the movies and the wrestling matches at the Coliseum. His favorite movies were Planes, Trains, and Automobiles, the Rocky films, the Pink Panther films, and Predator. His favorite singers were Elvis Presley, Ray Charles, and Johnny Cash, and Kenny Rogers. He was a very hardworking man.Arthur was always clowning around and making jokes. He liked being the center of attention. He was a loving husband, father, grand-father, uncle, and friend. In his later life, Arthur cared for and helped Martha to raise his nieces, nephews, and cousins, whom he loved very dearly. Arthur will be deeply missed. He is preceded in death by his parents; 12 siblings; mother-in-law; and a nephew. Arthur is survived by his loving wife of 55 years, Martha; 3 sons, Arthur Andrew Cirilo Diaz Jr. and girlfriend Sarah Doan, Gilbert Roland Diaz and Mary, Jesse John Diaz and his wife Kathleen (BK); and his only daughter, Barbara Ann Diaz; 4 granddaughters, Cameron Marie, Skylar Jade, Rhylee Amber, and Aubrey Rayne Diaz; brother Ruben; brother-in-laws, Richard Castillo and Michael Zendejas; many nephews and nieces, godchildren, and other loving relatives and friends. Arthur’s family extends a special heart felt thank you to the caring staff at Brookhollow Heights Transitional Care Center for the tender care they provided to him. A visitation will be held on Thursday, February 13, 2020 from 5:00 pm to 8:00 pm with a Rosary at 7:00pm at San Jacinto Funeral Home 14659 I-10 East Freeway Houston, TX 77015.

The family of Arthur Diaz created this Life Tributes page to make it easy to share your memories.

Send flowers to the Diaz family.