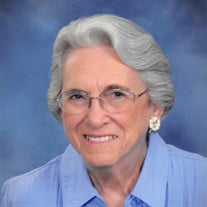 Ruth Clarice (Williams Reed) Cangemi July 22, 1925-June 29,2020 Clarice was born July 22, 1925 in Houston, Texas to Ruth (Allen) and Clarence Lee Williams. At the time of her birth her parents lived in Madisonville, Texas where Mr. Williams owned a cotton gin and a trucking company. She is preceded in death by her parents and two sisters, Sylvia Annette and Mildred Elayne. In 1937 the family; including a younger sister, Mary Dionne, moved to Waco, Texas. It was there Clarice graduated from High School. In 1943 she moved to Houston and began working for Anderson-Clayton Cotton Co. Early in 1946 she met and married Eddie O. Reed, an ex-marine. They purchased a home in Galena Park, Texas where they raised their three children: Cheri Lynn, Eddie Jr., and Karen Leigh. In 1949 she went to work for Weingartens in their Data Center and worked there until October 1951 at which time she became employed by Champion Papers in Pasadena, Teas as a data entry clerk. She remained with this company for almost 30 years; retiring February 1, 1981. At the time of her retirement she held the position of Programmer/Analyst and was Supervisor of the Data Processing Dept. Eddie Sr. passed away in 1976 and in 1979 Clarice married again. This time to Sam T. Cangemi. They moved to Humble, Texas in the Atascocita Forest subdivision in June 1987. They enjoyed their retirement by gardening, playing cards, and dominoes, and visiting family and friends. Widowed again in 1994, Clarice continued to reside in their original home in Humble. She was a member of Atascocita United Methodist Church and was active in the Goodtimers Senior Group. She was responsible for printing a newsletter for the “Goodtimers” each month and was also active in the Eastern Star. She enjoyed playing bridge when time allowed. Survivors include son, Eddie O. Reed Jr and wife Marty; daughters, Karen Leigh O’Brien and husband Alvin, and Cheri Iles and husband Dave; one sister, Mary Dionne Redman. Grandchildren, James and Eric Green, Tammy Oxborrow, Jennifer Iles, Michelle Hotte, Kimberly Lyons, Christopher Reed, Scott O’Brien, and Autumn Garner. Great grandchildren include Stuart and Jonathon Salmon, Christopher Cremeen, Douglas, Danielle, and Ashley Oxborrow, Jordan Green, Trynt Seber, Kaitlin, Macy, and Nickolas Lyons, John, Garrett and Lauren Hotte, Ashton and Kehl Garner, Landon and Brody Reed, and Keelin O’Brien. Two great-great grandchildren, Addison Kerr and Stuart Wayne Salmon Jr. I love you, Mom.

The family of Clarice W. Cangemi created this Life Tributes page to make it easy to share your memories.

Send flowers to the Cangemi family.