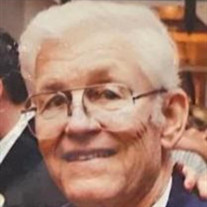 William M. Fivecoat Jr., age 93 passed away on April 1, 2022 in Baytown Texas. He was born on October 2nd, 1928 to William M. Fivecoat and Juanita Hartung Fivecoat in Houston, Texas. He graduated Milby High School and attended college classes at the University of Houston. William (Bill) proudly served in the U.S. Navy. Bill married Barbara Ann Lee in September of 1950 and they had 3 children. Pamela, David, & Eileen. Barbara went to be with God in 1980. Bill met Beatrice Reyes and they were married in July of 1984. Bea has one daughter Patricia (Trish). He worked at the Docks in Houston as a young man and then went to work as an able-bodied seaman on a ship for a while. He worked as a Chemical Plant Worker for most of his career in various positions (Operator, Millwright, and Instrument Tech) and retired from Rohm & Haas in 1984. Bill loved Airplanes. He loved to fly them, build them and repair them. He was also an avid reader and loved to read about them. He also loved to travel. He loved to hitch up his travel trailer and pull it all around the United States and Canada. He and Bea even made a trip with it all the way up to Alaska. Dad also loved Hawaii he and Bea were able to spend quite a bit of time there. Bill was an excellent craftsman and could fix almost anything. It was always good to have him around to help out or offer a word of advice. He built his first house in South Houston, an airplane hanger in Crosby, re-built Stearman crop duster wings, restored a Citabria aircraft from the bare frame, and worked on many other projects for himself and to help others. He was preceded in Death by his Father William Marion Fivecoat Sr., his first wife Barbara Ann Fivecoat, his Mother Juanita Selma Fivecoat, and his second wife Beatrice R. Fivecoat. Bill is survived by his Children Patricia (Trish) Herrera, Pamela & Archie Lucas, David & Pauline Fivecoat, & Eileen Crisp. Grand children Craig and Terrina Lucas, Nicholas & Amanda Lucas, David J. & Kacie Fivecoat, Luke Fivecoat & Ashlee, Justin Fivecoat, Courtney Moody, Shawn Crisp, and Ryan Crisp. Great Grand children Alyssa & Ethan Lucas, Brooklyn C. Fivecoat, Tristan Van Pelt and Ernie Moody. Brother Robert (Bob) Fivecoat. Cousin Robert (Robbie) Fivecoat. In Lieu of flowers, Memorials or donations may be made to Operation Smile or Southern Poverty Law Center. Visitation will be Saturday April 9, 11am-12pm at San Jacinto Funeral Home, 14659 East Freeway, Houston, Tx. Funeral services will follow immediately after visitation at 12pm. Internment will follow service and San Jacinto Memorial Park.

In Lieu of flowers, Memorials or donations may be made to Operation Smile or Southern Poverty Law Center.

Send flowers to the Fivecoat family.