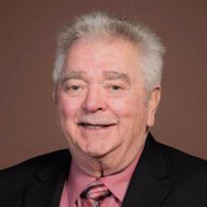 William A. "Bill" Darling, 75, passed away on September 20, 2021. He was born December 9, 1945 in Bastrop, TX to Raymond and Bernice Darling. He grew up in Greens Bayou and was a 1964 graduate of Galena Park High School. Bill proudly served his country in the United States Army from 1966 to 1972. After his discharge from the Army, he went to work for Armco Steel. When the steel mill closed, he went to work for Don McKuin Electric and ultimately retired from the Albemarle Corporation in Pasadena, TX. Additionally, he served as a volunteer fireman/paramedic for the Cloverleaf Fire Department in his younger years. Later, he served as Commissioner for Harris County Emergency Services District 12 until 2016 when he moved to Pearland, Texas. Bill married his sweetheart, Barbara Evans, August 25, 1967 at Peace Lutheran Church in Galena Park, TX. He and Barbara were active in the Walther League and with the youth program at Peace for many years. They later became members of Christ Lutheran Church, where he served as an usher. He and Barbara transferred their membership to Trinity Lutheran Church in the early 2000's. He was active in the PEP club and was well known for his Bingo calling skills. He enjoyed football, traveling, good pranks, telling stories to anybody that would listen and most importantly, spending time with his family. Anybody that knew Bill knew how proud he was of his girls, Brenda and Brooke, their husbands, and his five grandsons. Bill is preceded in death by his wife of 44 years, Barbara Evans Darling; parents Raymond and Bernice Darling; brother Donald Darling; father-in-law and mother-in-law James and Lucille Evans. He is survived by daughters and sons-in-law Brenda and Brent Bartell and Brooke and Brian Abby; grandsons Blake and Brendan Bartell and Braydon, Benjamin and Brody Abby; his beloved dog Hank; numerous nieces, nephews and extended family members. Bill was dearly loved and will be remembered for his mischievous smile, kind heart and gift of gab. The family would like to thank Dr. Teddy C. James, MD for always taking care of dad - whether he showed up at the front office door or your personal back office door. The family will receive friends on Friday, October 1, 2021 from 5:00 to 8:00 pm at San Jacinto Funeral Home. The funeral service will be conducted on Saturday, October 2, 2021 at 11:00 am at Trinity Lutheran Church, 800 Houston Ave, Houston, TX 77007. Burial will follow at San Jacinto Memorial Park at 2:30 pm. In lieu of flowers, memorial contributions may be made in his name to the Trinity Lutheran Church Holy Smokers or Wounded Warrior Project.

William A. "Bill" Darling, 75, passed away on September 20, 2021. He was born December 9, 1945 in Bastrop, TX to Raymond and Bernice Darling. He grew up in Greens Bayou and was a 1964 graduate of Galena Park High School. Bill proudly served... View Obituary & Service Information

The family of William Albert Darling created this Life Tributes page to make it easy to share your memories.

Send flowers to the Darling family.