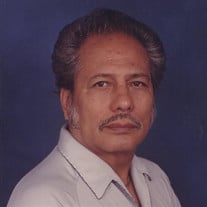 Toribio “Toby” Garcia (April 16, 1929 – November 11, 2020) Toribio “Toby” Garcia, 91, of Jacinto City, Texas has left our world and joined our mother, Maria Cecilia Parra Servin Garcia. He passed peacefully on Veteran’s Day, November 11th, 2020 in his home. He was born on April 16, 1929 to Jose and Guadalupe Garcia in La Havana, Texas. His most recent marriage was to Maria Cecilia on March 23rd, 1973 in Edinburg, Texas. He was a Tool Helper/Tool Room Supervisor for ENTEC Energy Technology in Crosby, Texas for over 20 years. In his retirement, he enjoyed tending to his home and yard, watching television, and playing with and spoiling his grandkids. He served in the United States Marine Corps from March 18, 1952 to March 17, 1954 with the rank of Private First Class. He was wounded in the Korean War and was awarded the Korean Service Medal, the United Nations Service Medal, and the National Defense Medal. Left to cherish his memory are his four sons, Juan Garcia and his wife Monica Lynn of Spring; Javier Garcia and his wife Ana of Houston, Toribio Garcia, Jr. and his wife Nadia of Jacinto City, and Jose Antonio Garcia and his wife Esmeralda of Victoria; and one daughter from a previous marriage, Maria Ana Salinas of Mission. Toribio is survived by his eight grandchildren: Javier Garcia, Jr. and his wife Alexis Yvette, Kayla Alexis Garcia, Jayden Alexander Garcia, Jayda Neveah Garcia, Olivia Magdalena Garcia, Aurelio Salinas, Jr., Eric Christopher Salinas, and Jacob Daniel Salinas. He is also survived by his two great grandchildren: Azalea Cecilia Garcia and Lailany Aileen Garcia. He is preceded in death by his wife, Maria Cecilia Parra Servin Garcia in 2007 and his grandson and fellow U.S. Marine, Sgt. Michael Anthony Salinas in 2012. Visitation and funeral service for Toribio Garcia will take place on the same day, Friday, November 20th, 2020. Visitation will take place from 11 am to 1 pm. Funeral service will start promptly at 1 pm. Visitation and funeral service will take place in the chapel of San Jacinto Funeral Home. He will be laid to rest at San Jacinto Memorial Park at 2:30 pm. We will always carry your memory in our hearts. WE LOVE YOU DAD and GRANDPA!!!!

The family of Toribio "Toby" Garcia created this Life Tributes page to make it easy to share your memories.

Send flowers to the Garcia family.