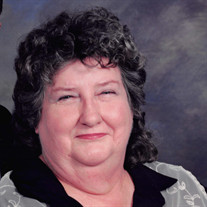 Theda Mozelle (Plummer) Roark, 81, reunited with her husband of 62 years, Curtis, in Heaven on Monday, April 29, 2019. Only 4 months and 2 days after his arrival. She was born October 30, 1937 in Glen Rose, Texas, to Ira and Grace Plummer. Theda went to Glen Rose High School where she met Curtis. After they married, she worked for the Somerville County Sheriff’s Dept. They later moved their family to the Houston area where Theda was a homemaker. After her children were all in school, Theda loved teaching Preschool at Glendale Baptist Church. She later worked for her son, Mike, at his car business in Pasadena. After Curtis retired, Theda began working in downtown Houston for Bank One as a loan officer and retired in the 1990s. Theda enjoyed crocheting and, over the years, made many beautiful gifts for friends and family. Theda was greeted in Heaven by her parents, her husband, her sister, Betty Gosdin, and her half-brother, Greer Gibson. She leaves behind her sons Michael (Mike) Roark and wife Brendel of Deer Park, Curtis (Curt) Roark Jr. and wife Kelly of Humble, and daughter Lora Jean Roark of Houston. MawMaw will be missed by her grandchildren, Leslie Rose and husband Brandon, Collin Roark, Curtis (Trey) Roark III and wife Heather, and Kaitlin Roark; her great-grandchildren, Sephora, Lilia, Asher, Noah Rose and Cash Roark; and numerous nieces, nephews, extended family and friends. Family will receive friends and family on Tuesday, May 7, 2019 at 9:30 a.m. at Sterling Wood Church, 4910 East Sam Houston Pkwy N, Houston, Texas 77015 with a Memorial Service to follow at 10:00 a.m. The family suggests memorial contributions can be made to Sterling Wood Church or the American Kidney Fund at kidneyfund.org or by mail to American Kidney Fund, 11921 Rockville Pike, Suite 300, Rockville, Maryland 20852.

Theda Mozelle (Plummer) Roark, 81, reunited with her husband of 62 years, Curtis, in Heaven on Monday, April 29, 2019. Only 4 months and 2 days after his arrival. She was born October 30, 1937 in Glen Rose, Texas, to Ira and Grace Plummer. Theda... View Obituary & Service Information

The family of Theda Mozelle Roark created this Life Tributes page to make it easy to share your memories.

Send flowers to the Roark family.