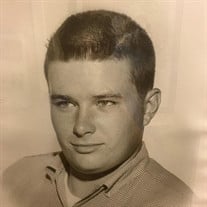 Terry Dale Wisdom, 71, of Jacinto City, Texas passed away peacefully at his home on June 18, 2019 with his wife and his daughter not only by his side, but holding his hands. He was born on January 21, 1948 as the only child to John B. and Mildred Earp Wisdom in Blytheville, Arkansas. During the 1950s, his family moved to Texas where Terry started the 3rd grade at Woodland Acres Elementary School in Galena Park ISD. It was during this time that many life-long friendships formed and that he sustained until his last breath. On May 29, 1963, he professed his intentions for a lifetime of love to Patricia Anne Breedlove, who, from that moment, stood by his side with her unconditional love and support. Terry was an extremely proud graduate of the Galena Park High School Class of 1966. He played baseball and football, which is where his appreciation of the outdoors began to flourish. After graduation, Terry became an Operator for Diamond Shamrock, and he later retired after 42 of service in 2013 as the Logistics Manager of North America for ISK Biosciences Corporation. During his rewarding tenure in the chemical industry, his role required him to travel. He spent much time in Latin America, and he learned to speak Portuguese. He spent his vacation time as an avid fisherman, and a founding member of the Bravo BASS Club where many camping trips, lake excursions, and tournament trophies were acquired. He learned to play golf, and he enjoyed a membership for many years at the Channelview Golf Course. He was also a hunter, which led him to experience exotic game hunts, and the opportunity to host hunts for others. He shared his love of traveling with his family by taking them as far as Hawaii and to places closer by boat, plane, and train. His only goal in these excursions was to make memories with his family. He is survived by his wife of 52 years, Patricia Wisdom; his daughter Dalane Elizabeth, and son-in-law, J. Kurt Bouillion; and his granddaughter, Magailie Michelle Bouillion. Arrangements have been made at San Jacinto Funeral Home for visitation on Thursday, June 20, 2019 from 5:00 p.m. to 8:00 p.m. Funeral services officiated by Dr. Ralph Draper will be held on Friday, June 21, 2019 at 11:00 a.m., with interment following in San Jacinto Memorial Park. Pallbearers are: Raymond Breedlove, Jason Breedlove, Matthew Dickens, Scott Dickens, Duncan Godell, and Bradley Bouillion. Honorary Pallbearers are the members of the 1966 Graduating Class from Galena Park High School. Immediately following the services, the family extends a warm welcome for fellowship, memories, and lunch at the Wisdom’s home.

Terry Dale Wisdom, 71, of Jacinto City, Texas passed away peacefully at his home on June 18, 2019 with his wife and his daughter not only by his side, but holding his hands. He was born on January 21, 1948 as the only child to John B. and Mildred... View Obituary & Service Information

The family of Terry Dale Wisdom created this Life Tributes page to make it easy to share your memories.

Send flowers to the Wisdom family.