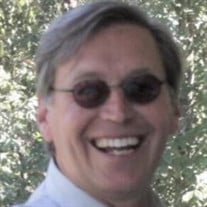 Russell Johnston "Rusty" Hensley Memphis - Russell Johnston "Rusty" Hensley of Memphis, Tennessee, passed away on December 12, 2020, following a long battle with renal cell carcinoma. Born in Dyersburg, Tennessee, Rusty spent his childhood living in many cities across the United States and in Germany while his father served in the U.S. Air Force. His most beloved childhood memories are from his time while living at the Air Force Academy in Colorado Springs, Colorado, where he developed his lifelong love of the outdoors and earned the rank of Eagle Scout. He went on to graduate from the University of Mississippi in 1978 and the University of Memphis law school in 1982. Rusty spent his career of over 35 years as an attorney in Memphis, most recently as a shareholder with Evans Petree. Generous of his time and active in his community, he served on many boards, including Christian Brothers University in Memphis, Memphis Athletic Ministries, the Liberal Arts College of the University of Mississippi, among others. Aside from his law practice, the most significant and rewarding part of his career was being the CEO of The Hartwell Foundation, a non-profit organization that supports cutting-edge, biomedical research as well as other organizations that benefit children. Rusty was a man of boundless energy and good will. Much loved and admired by his friends, Rusty gave of his time and talents to anyone in need. His kindnesses, both big and small, will live long in the memories of those he touched. Rusty had a wide range of interests. He particularly loved spending time with family and friends at his farm near Holly Springs, Mississippi. He was an avid gardener, as all those who shared in Rusty's bounty will attest. Rusty was the quintessential family man, devoted to his wife and two sons. He was renowned for his quick wit and irreverent sense of humor. It would be impossible to tally the number of those who called him "friend," and the positive impact he had on others truly set the bar. He is preceded in death by his father, Russell D. Hensley, and his sister, Mary Bright Hensley Adams. He leaves behind his wife of 36 years, Mary Pelham "Missy" Hunt Hensley, his two sons, Russell Johnston Hensley, Jr. (Camille) and William Hunt Hensley (Pauline) and three beloved grandsons. He also leaves behind his mother, Lillie Bright Johnston Hensley of Germantown, Tennessee, a sister, Laura Beth Hensley Matson (Arnie), and several nieces and nephews. Funeral services will be held at St. John's Episcopal Church in Memphis. In Rusty's memory, the family requests that memorial contributions be made to Dr. Paul Corn's research at MD Anderson Cancer Center, PO Box 4486, Houston, Texas 77210 or to St. Andrew's Episcopal Church, Collierville, Tennessee.

the family requests that memorial contributions be made to Dr. Paul Corn's research at MD Anderson Cancer Center, PO Box 4486, Houston, Texas 77210 or

Send flowers to the Hensley family.