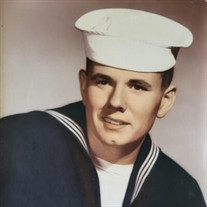 Paul Henley Moody, 83, of Houston, Texas passed away on May 5, 2022, in Webster, Texas. He was born on August 31, 1938, to John Henley and Violet Moody in Trinity, Texas. He married Angie Kidd on August 28, 1992, in Highlands, Texas. From 1957 to 1962 he served on the U.S. Navy as a AE2 (E-5). He was the retired part owner of Steelmasters Steel Erection Company of Houston, Texas. He enjoyed spending his free time going to Coushatta Cassino, working on the yard, listening to books on tape, but most of all spending time with his grandkids. He also enjoyed traveling around the world with his lovely wife and going on cruses and fishing. Paul is survived by his wife Angie Moody of Highlands, Texas; stepdaughter Lisa Williams and spouse Darrell Williams of Highlands, Texas; sons Scott and wife Lisa Moody and Steve and wife Lisa Moody; grandchildren Shermayne Crawford, Lauren Arroyos, Jackson Moody, Paige Moody, Brittney Lawson, and Dakoda Williams and five great-grandchildren. He is preceded in death by is first wife Shermayne Turbeville-Moody who passed in 1974; second wife Judy Tikkanen Moody who passed in 1984; his parents, grandparents, and brother Johnny Moody; grandson Marc Williams. Our Father, who art in heaven, hallowed be thy name; thy kingdom come; thy will be done on earth as it is in heaven. Give us this day our daily bread; and forgive us our trespasses as we forgive those who trespass against us; and lead us not into temptation, but deliver us from evil. Amen

The family of Paul Henley Moody created this Life Tributes page to make it easy to share your memories.

Send flowers to the Moody family.