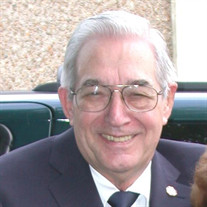 Milton Adolph Zwahr Passed away on Sunday, July 28, 2019, at Webster, Harris County, Texas. He was born on September 24, 1932 in Long Point, Fort Bend County, Texas. He was the second of eight children born to Paul August Zwahr and Minnie Emma Budewig and attended Big Creek Elementary and Richmond High School. United in marriage to Peggy Lillard on September 26, 1953, missing their 66th anniversary by 2 months. He was a hero to his sons and wife – so loving and devoted to them. He was an honest hardworking man, they were so blessed to have him. While his two older children were growing up he taught Sunday School at Southland Baptist Church in the old South Park area of Houston. Hobbies included hunting, fishing, gardening, and woodworking. Leisure time to him meant reading history books and watching the History Channel on television. He is survived by his 3 Eagle Scout sons, David, Steven [Sheryl], and Jon. Milton was active in Boy Scouts when his 3 sons were growing up, taking vacation to be able to attend Summer Camp with them and even went to Philmont Scout Ranch with his younger son, Jon. Milton was a 62 year member of Almeda Baptist Church, later renamed Southview Baptist Church after it moved. He was a 56 year Mason, serving as the Worshipful Master of Albert J. DeLange Lodge #1403 on 3 occasions, Past Patron of Almeda Chapter #1081, Order of the Eastern Star, a recipient of the Golden Trowel Award and holder of a “C” Esoteric Certificate. He retired from Dresser Industries after 39 years as a Mechanical and Gauge Inspector. Between 1965 and 1983, he worked for the Houston Sports Association at the Astrodome, becoming an enthusiastic fan in the process. This became evident in 1977 when taking vacation from Dresser with Peggy and Jon went to Florida and attended the Astros spring training. After the stroke from 2 years ago, the first thing out of his mouth each morning after telling Peggy he loved her was a tossup, “when were the Astros coming on” or “what’s for breakfast.” He also is survived by 3 grandchildren: Shonda Pittman [Allen], Kayla Labra [Hector], Steven Zwahr, Jr.; and 5 great grandchildren, 1 great-great grandchild, with another arriving in about 2 weeks. He was pre-deceased by son David’s wife, Debra and great granddaughter, Aisha Bryant. He had 7 siblings, 3 who pre-deceased him: Chester [Nelda survived him], August, and Alma Brandes [Robert pre-deceased him], surviving him are 4 siblings; George [Marie], Jimmie [lost his wife Sharon, July 17, 2019], Lester, and Clara Alms [Eddie]. ​A visitation will be held at 11:00 am on Friday, August 2, 2019 with a Funeral Service beginning at 12:30 pm with interment to follow at San Jacinto Memorial Park and Funeral Home at 14659 I-10 East Freeway in Houston, Texas, 77015. In lieu of flowers please donate to the Southview Baptist Church building fund.

The family of Milton Adolph Zwahr created this Life Tributes page to make it easy to share your memories.

Send flowers to the Zwahr family.