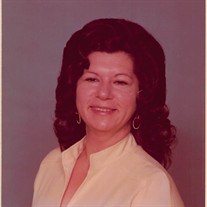 Melva Nadine Ivey Beamon was born February 17, 1943 in Pasadena, Texas to Mary and Lester Ivey. She joined her loving husband and family on May 6, 2022 when God took her Home to be with them. Melva was preceded in death by her husband Donald Beamon, son Donald Carl Beamon, Jr.; parents Lester and Mary Ivey; mother and father in law, Faye and Dub Beamon, step-father-in-law Bob Wilson; brothers Jonathan and Everett Ivey; sister Ann Marice Ivey, sister-in-law Mary Alice Perkins Ivey in addition to nieces, cousins, aunts, uncles, and grandparents. Melva is survived by her son, Shawn Ivey Beamon; granddaughters, Kira and Tim Lawson, Karissa and Joe Wilke, Alexis Beamon; grandsons, Dillion Beamon and Donald Carl Beamon III “Trey”, Shawn Ivey Beamon II in addition to great grandsons Julian and Gannon Lawson, Noah Wilke, and great-granddaughter Avery Beamon, brother Aaron Ivey, sisters Carol Ivey and JoAnna Ivey, sister in law, Joy Odom Ivey, niece Lori Ivey Battaglia and Rob, nephew Derek and Karen Els Ivey and their daughter Kayden, sister in law, Ella Mae Beamon Matthews and nieces Mae Dean Cockerham and Lovie Matthews. Melva graduated from Elbert L. Furr Jr.- Sr. High School, January 1962 months after it was built. She was among the small senior class of graduates the year Furrr HS opened after transferring from Austin High School to the location closer to her family home. This first senior class was able to select the school colors, mascot, motto, and a number of other firsts. Melva enjoyed cooking family dinners, being out-doors doing yard work, fishing, driving, playing tennis, volleyball and badminton, live theater, traveling, and spending time with family and friends. Melva loved being with her sons and their families. Being left a young widow after twelve and a half years of marriage with two young boys to raise, she knew the need of instilling a Christian upbringing and the importance of dedicating her sons to the Lord and committing them back into God’s hands. Over the years, she said many prayers on their behalf for God to guide and protect them. Melva was always there to support and encourage her children.. Melva retired from Alamo Title Company December, 2003 where she worked in accounting. She made numerous friends, neighborhood, school and co-workers who have kept in touch with her through the years. She also worked the election polls until she was no longer able due to other responsibilities. She had a fun playful nature, loved to laugh, and her laughter was contagious. Melva was a person of her word. If she said she would do something, you could count on her. Melva handled adversities with grace and dignity. She never complained or said, “Why me?” She would pray and ask for God’s help and strength... Melva is not alone or in pain and that is comforting to us. Our hearts are broken; we love and miss you Melva. Although you are gone, you will always remain in our hearts. We thank God for giving us such a strong determined sister. You fought the good fight, now it is time to rest and reap your reward. God bless you precious Melva. …until we see you again. …No eye has seen, No ear has heard, and no mind has imagined what God has prepared for those who love Him. 1 Corinthians 2:9 NLT

Melva Nadine Ivey Beamon was born February 17, 1943 in Pasadena, Texas to Mary and Lester Ivey. She joined her loving husband and family on May 6, 2022 when God took her Home to be with them. Melva was preceded in death by her husband Donald... View Obituary & Service Information

The family of Melva Nadine Ivey Beamon created this Life Tributes page to make it easy to share your memories.