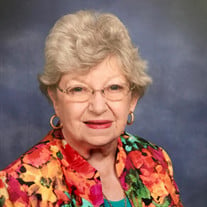 Mary Grace Wilhelm Oswald went to be with the Lord on the morning of February 12, 2020. The daughter of Raymond and Alma Wilhelm, she was born in San Antonio, Texas on June 30, 1936. She is survived by three sons: Louis A. Oswald, III (Brandi McCubbin) of Littleton, Colorado, Kelly V. Oswald (Stacey) of Houston, Texas, and Brent A. Oswald of Austin, Texas; grandchildren: Sara Joe Oswald, “Ali” Alexandra Grace Oswald, Louis A. Oswald IV, Jackson Ray Oswald, David Brady Oswald, Avery Joseph Oswald, Ethan Michael DiGiovanni and Camryn Lynn DiGiovanni; and one great-grandchild: Kayden Wyatt-Blair Oswald. She is preceded in death by her husband Louis A. Oswald, Jr, her brother Fr. Ray Stanley Wilhelm, OMI, and two sons, Brett C. Oswald and Blair J. Oswald. Born in San Antonio, TX, Mary attended St Mary's Catholic School, and Providence High School. She went on to earn a degree in Journalism at Texas Women's University. On Sept 22, 1962, she was married to Louis in a ceremony officiated by her brother at St Mary's Catholic Church in San Antonio, TX. As an Army wife, she traveled to Louis' assignments in Aberdeen, Maryland, Vicenza, Italy, and Ft Hood, Texas, until his discharge. The family settled in the new Woodforest subdivision on the East side of Houston, where she lived through her death. She was a loving and caring mother and housewife, always preparing homemade meals for the family, and taking care of the household. For many years, she wrote the column "Woodforest Shavin's" for the community newspaper. She was active in PTA, cub scouts with her sons and husband, and would often be found with her boys at the local swimming pool. She was an avid player of bridge (belonging to several different bridge-clubs through the years.) For many years she worked as a substitute teacher in Galena Park ISD. In her senior years she was an avid participant in the local senior Olympic games winning gold in her favorite competition the spelling bee. She has been a member of St Dominic Catholic Church since 1966. Funeral Mass will be held at St Dominic Catholic Church, 8215 Reservoir St., Houston, TX 77049, on Monday February 17 at 10AM. In lieu of flowers, donations can be made in Mary Oswald’s name to St Jude Children’s Research Hospital (501 St Jude Place, Memphis, TN 38105) or to the Fr. Ray Wilhelm Burse ℅ Fr. Art Flores, OMI, 327 Oblate Dr., San Antonio, TX 78216 A private burial will be in San Fernando Cemetery II, San Antonio, TX at a later date.

Mary Grace Wilhelm Oswald went to be with the Lord on the morning of February 12, 2020. The daughter of Raymond and Alma Wilhelm, she was born in San Antonio, Texas on June 30, 1936. She is survived by three sons: Louis A. Oswald, III (Brandi... View Obituary & Service Information

The family of Mary Grace Oswald created this Life Tributes page to make it easy to share your memories.

Mary Grace Wilhelm Oswald went to be with the Lord on the morning...

Send flowers to the Oswald family.