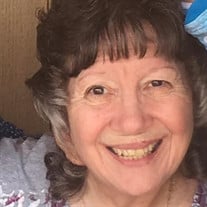 Mary Jane Johnson Holland met Jesus Face to Face on Monday, December 28, 2020. She was born February 11, 1946, in Laurel, MS to parents Mildred Mae Rayner and Doss Johnson. Her family moved to East Texas in 1950, and later relocated to Houston. She attended Woodland Acres Elementary and Junior High and was a proud member of the Galena Park Yellow Jacket Marching Band and Graduating Class of 1964! She met the love of her life, Charles Allen Holland, at Cook’s Skating rink and they celebrated 56 years of marriage in August. In 1970, they moved to Highlands, Texas, where they would raise their family and live for the next 30 years. She was a member of Highlands First Assembly of God Church where she worked for a time as secretary. Her Faith in God is her greatest legacy and was evident to anyone who ever knew her. She was a mighty prayer warrior and was known for praying with friends and family regularly in their time of need and rejoicing in the Lord when the need was met. Mary was the ultimate Room Mother, Team Mom and Cheerleader for her children. This was evident through her extensive involvement in the Highlands Elementary PTA, Highlands Little League Auxiliary, and Highlands Sports Association. She was always extremely competitive and loved sports. As a young person she played multiple sports in school and continued in adulthood by participating in the Women’s softball league, bowling league and as girls’ basketball coach. After her children were older, she worked outside the home at The Highlands Star Newspaper. A job she loved! In 2000, she and Allen moved to Laurel, MS to be closer to her extended family. In 2006, they moved to Onalaska, TX where she resided until the time of her death. Mary is survived by her husband Allen Holland, daughter Angie Hennigan and son Bobby Holland. She is also survived by the lights of her life; her grandchildren Ashlee Holland, Samantha Hennigan, Jessica Lowe, Cody Holland, Breanna Holland and Lyndsie Miller; great grandchildren Kaylee Hennigan, Blaze Persad, Lexi Miller and Brooks Holland. She also leaves behind her sister Martha Zumwalt, and brothers Doyle Johnson, Charles Johnson, James Johnson and Gregory Johnson, and numerous nieces, nephews and cousins. She was preceded in death by her parents, sisters Elsie Barker and Melissa Richardson, and brother JD Johnson, and son-in-law Rick Hennigan. Visitation is Sunday, January 3, 2020 from 1pm-4pm, Funeral Service Monday, January 4, 2020, at 11:00 am. Arrangements are entrusted to San Jacinto Funeral Home & Memorial Park, 14659 East Fwy, Houston, TX 77015. Friends and family are welcomed. Masks and social distancing will be enforced.

The family of Mary Jane Holland created this Life Tributes page to make it easy to share your memories.

Send flowers to the Holland family.