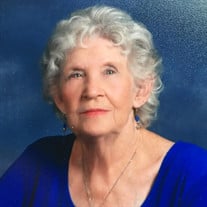 Mary Sue “Tut" (Adams) Oliver Powell Davis passed from her earthly life to her heavenly home on December 31, 2018 at the age of 87. Sue was the second of five children born at home in San Jacinto County near Cleveland, TX on September 27, 1931 to Arthur Abel and Lola Lorene Adams. At 18, she married the love of her life, WWII Navy Veteran Stanley Williams Allen “Sam” Oliver, they had five beautiful children. They moved around the country for Sam's work. Sue was active in the local churches but always considered Truth Tabernacle Channelview, TX home. After Sam passed away suddenly in 1973, she married Franklin “Buddy” Powell and they moved to Kerrville, TX. Sue was an excellent seamstress, working in a custom home design shop for over 20 years before acquiring her own clothing boutique, the Louise Shoppe in downtown Kerrville. Sue was very active in the community and served as President of the Kerrville Merchants Association. Sue’s last marriage was to George Davis, who had served in the Navy with his best friend Sam Oliver, George passed away in 2003. Sue was a loving mom to three daughters and two sons, 15 grandchildren, 32 great-grandchildren and twins due in March and 3 great-great-grandchildren. Sue is survived by sons Stan Oliver and his wife Francis of Huffman, Gary “Geg” Oliver of Mount Belvieu, daughter Sherry Norton and husband Terry of Huntsville, a brother Pat and Jeanine Adams of Houston, sister Sarah and Ralph Castleman of Cleveland and sister Karen “Bit” Adams of Kirbyville, TX and preceded in death by her parents; brother Bubba Adams; her three husbands Sam, Buddy, and George; and daughters Glenda Butts and Kathy Boyd. Services will be held on Saturday, January 5, 2019 at San Jacinto Memorial with a family viewing at 9 a.m., public viewing at 10:00a.m. and memorial services at 1 p.m.

Mary Sue &#8220;Tut" (Adams) Oliver Powell Davis passed from her earthly life to her heavenly home on December 31, 2018 at the age of 87. Sue was the second of five children born at home in San Jacinto County near Cleveland, TX on September... View Obituary & Service Information

The family of Mrs. Mary Sue Davis created this Life Tributes page to make it easy to share your memories.

Send flowers to the Davis family.