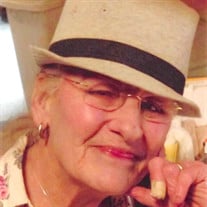 June Parnell got her wings on the evening of Wednesday, November 4, 2020 in the Texas Medical Center. She had been hospitalized for several weeks prior to her death. She was born Minnie June Ann Sitton on June 28, 1934 to Arbie Cleatus and Rosalie Stepherson Sitton in Huntsville, Texas. She was named for her maternal Grandmother, Minnie Lado Stepherson, but was always known to everyone as June. Later the family moved to Baytown where June graduated from Robert E. Lee High, and participated in the DO Club, History Club, and she played Alto Saxophone in the High School Band. In 1955 she married Lionel Barnes Parnell in the home of her parents. After a short honeymoon, they moved into a home at 15613 Mainbocher (now Woodforest Blvd.) in Channelview; the same home that June would occupy the rest of her life. The marriage was blessed with five children, Richard, Bennie, Arbie, Tony, and April. June worked for 15 years at the North Shore Animal Clinic as well as being a full-time homemaker, wife, and mother of five active busy children. She was and avid bowler, and longtime secretary of the Tuesday night Glendale Mixed League, and served for many years as a score keeper for the Baytown Softball Association. She was preceded in death by her parents, her husband, Lionel Barnes (L.B.) in December 2000; a son, Tony in 2015; as well as two grandsons, Ronnie and Chevy; and brother, Arbie Scott Sitton. June is survived by her loving sons, Richard of Houston, TX, Benn of Richmond, TX, Arbie of Channelview, TX, and daughter, April of Montgomery, TX; numerous grandchildren, and great-grandchildren, as well as nieces and nephews. Visitation will be held on Monday, November 9, 2020 from 5pm-8pm at San Jacinto Memorial Park and Funeral Home with services to be held on Tuesday, November 10, 2020 at 1PM followed by graveside services and interment at San Jacinto Memorial Park. June was greatly loved and will be missed by many. The Lord is my shepherd, I lack nothing. He makes me lie down in green pastures, he leads me beside quiet waters, he refreshes my soul. He guides me along the right paths for his name’s sake. Even though I walk through the darkest valley, I will fear no evil, for you are with me; your rod and your staff, they comfort me. You prepare a table before me in the presence of my enemies. You anoint my head with oil; my cup overflows. Surely your goodness and love will follow me all the days of my life, and I will dwell in the house of the Lord forever.

June Parnell got her wings on the evening of Wednesday, November 4, 2020 in the Texas Medical Center. She had been hospitalized for several weeks prior to her death. She was born Minnie June Ann Sitton on June 28, 1934 to Arbie Cleatus and... View Obituary & Service Information

The family of June Ann Parnell created this Life Tributes page to make it easy to share your memories.

June Parnell got her wings on the evening of Wednesday, November...

Send flowers to the Parnell family.