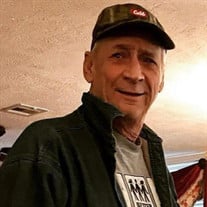 Joseph Wesley Chambers, Jr., 79, of Houston, Texas passed away January 18, 2022 in Houston, Texas. Joseph was born December 18, 1942 in Sheffield, Alabama to Joseph and Marjorie Chambers. He was an owner/operator of "Chambers Trucking" which... View Obituary & Service Information

The family of Joseph Wesley Chambers Jr. created this Life Tributes page to make it easy to share your memories.

Send flowers to the Chambers family.