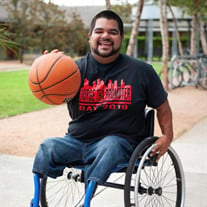 Jorge McGuinn, 31, of Houston, Texas, passed away September 26, 2021 in Houston, Texas. He was born January 31, 1990 to Pamela Mollenhauer in Houston, Texas. Jorge was known as "Jorge Tha Promoter". He was a member of West Gray Adaptive Sports and Recreational Center. He enjoyed spending quality time with his two sons and his loving girlfriend. His biggest passion was promoting for Houston, TX. He enjoyed giving back to his community and helping in any way possible. He loved his Texans, playing basketball, his blind crew, and most importantly he loved his friends and family. Jorge is survived by his girlfriend, Tatiana Portillo of Houston, TX; sons, Jorge Abel McGuinn, Jr. and Josiah Javier McGuinn both of Houston, TX; sisters, Estrella McGuinn, Diane McGuinn and Raynolda Mollenhauer all of Houston, TX; brothers, Israel and wife Lomia McGuinn of Houston, TX, Eddie O'Connor, Michael O'Connor of Jennings, Louisiana, and Robert and wife Lisa Bruner of Drumright, Ok. He was preceded in death by his mother, Pamela Mollenhauer; grandmother, Elois Laywell; aunts, Rose Lanier and Patricia Escamilla; and sister, Baby Estrella. In lieu of flowers, Jorge would like for you to donate to West Gray Adaptive Sports and Recreational Center of Houston, TX.

The family of Jorge McGuinn created this Life Tributes page to make it easy to share your memories.

Send flowers to the McGuinn family.