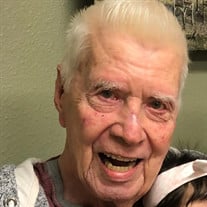 John Murphy Calvert (92) passed away on July 17, 2020 in Pasadena, Texas. He was born in Sterling, Missouri, on May 30, 1928 to William Brook Calvert and Julia Mae Murphy Calvert. John was one of 9 siblings; they spent their early years in independence Mo running The Calvert Dairy Farm. Daddy decided early on that farm life was not cut out for him and he enlisted in the Army after leaving school in the 11th grade unfortunately for him, they found out he was just 16 and sent him back home. After graduating high school, he re-enlisted and spent the next 26 years serving his country. He did tours of duty in Canada, Japan, Holland, Switzerland, Germany, & Vietnam. He also served time in the Pentagon, Hawaii, MacDill AFB and as few other places along the way. After retiring from the service, he went back to college and got a degree, he worked for 25 more years for Martin Uniform Company in Tampa finally retiring at 74. He and mother enjoyed playing cards, bowling (we had tons of trophies), singing in the church choir, traveling to see his family or on church trips. He loved his family so very much and talked about every one of them that he knew often. He always tried to put others before himself and always did the best he could do at everything he did. He enjoyed a 55-year marriage and has missed mother every day since she left this earth. He also was in love and thankful to Margaret Brannen for taking such good care of him the last 7 years and Kelli Lannie for visiting him so frequently and bringing him goodies. My brother and I would also like to thank the great nurses he had at Courtyard Heather, Denise, both Amanda’s all his great aides and Lakesha we love you all. Special thanks to all that have loved him along the way, Gene and I are so blessed to have had him this long and we are happy that you were able to share in his spirit we hope that you took something from him. Preceded in death by his parents, wife Melba LaDeen, brothers George, Reece/Jean , Bill/Lavene, & Roger; and sisters, Ruby Hill & Ruth McGaughey and brother in law Mike Zeller. He is survived by his daughter, Kim Walt and Jim; stepson H. Eugene Renno and Holley; 1 brother Donald/Shirley Calvert and Sister Frances Zeller and Sister In Law Joyce Calvert; 4 grandchildren, Chip Renno and Tammy, Robbie Renno, Kevin Renno and Beth, JD Walt and Marissa, and Susan Renno; 4 Great Grandchildren Trey/Brooklyn Renno, Drew/Emma Renno, Jonathan & Ryan Renno and Amelia Walt and numerous nephews, and nieces.

John Murphy Calvert (92) passed away on July 17, 2020 in Pasadena, Texas. He was born in Sterling, Missouri, on May 30, 1928 to William Brook Calvert and Julia Mae Murphy Calvert. John was one of 9 siblings; they spent their early years in independence... View Obituary & Service Information

The family of John Murphy Calvert created this Life Tributes page to make it easy to share your memories.

Send flowers to the Calvert family.