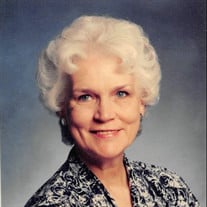 Jo Ruth Chambers, 85, born August 16th, 1935 in Pawnee, Oklahoma, departed this life and went home to be with our lord and savior Jesus Christ, on February 24th, 2021. She was the first daughter born to Alice Fern Jonas Sellers and Joseph Morgan Sellers. Growing up she lived with her mother, sister, Sydney, and her Aunt Ruth. Her mother and aunt instilled in her a strong love for reading and she carried that love with her all though her life. She attended school in Pawnee, Oklahoma, where she met the love of her life, William H. Chambers. Jo Ruth married William on June 26th of 1953 at the age of seventeen. Together they had five children, William Hugh Chambers, Timothy Burl Chambers, Ronald Gayle Chambers, Tana Kay Chambers, and Terry Lyn Chambers. They moved from Pawnee, Oklahoma to Baytown, Texas in 1957, eventually settling in Deer Park, Texas in 1961 where they lived, loved, and raised their family. Jo Ruth was a loving wife, mother, Granny, Great-Granny, and friend. She was also hardworking and intelligent and was not afraid to seek her dreams, even when times were hard. In the fall of 1964 after getting married and having five children, she entered into college for the first time. She had decided, in addition to being a wife and mother, she wanted to be an English teacher and going to college was her first step in achieving her dream. She attended the University of Houston Clear Lake for 6 years and graduated in the fall of 1970. In the fall of 1973, she began her teaching career at Sam Rayburn High School in Pasadena, Texas where she taught English for 27 years and retired in the summer of 2000. After retirement she went to work for her husband’s company, Osage Transportation, for a few years. Jo Ruth and William loved to travel. They traveled all over the world together visiting many amazing places. Some of her favorite past times included gardening, reading, swimming, shopping, and her weekly visits to the beauty shop. Jo Ruth is preceded in death by her husband, William Chambers, her mother, Fern Sellers, and her three sons, William Hugh Chambers, Timothy Burl Chambers, and Ronald Gayle Chambers. Jo Ruth is survived by her son Terry Lyn Chambers and significant other Davalynn Riley, daughter, Tana Kay Chambers, sister, Sydney Gale, Grandchildren, Brittney and Travis Barnett, Lindsey and Tyler Michalsky, Heidi Gatewood, Ryland Chambers, Hannah Barnes, Cassie Chambers and numerous great grandchildren. The Chambers family would like to thank everyone for the thoughtful expressions of sympathy and condolences during this difficult time. Funeral Services will be held at San Jacinto Memorial Park and Funeral Home on Thursday March, 11th, 2021. The doors will open at noon for visitation and the services will begin at 1:00 with burial following the service at approximately 2:30 pm.

Jo Ruth Chambers, 85, born August 16th, 1935 in Pawnee, Oklahoma, departed this life and went home to be with our lord and savior Jesus Christ, on February 24th, 2021. She was the first daughter born to Alice Fern Jonas Sellers and Joseph Morgan... View Obituary & Service Information

The family of Jo Ruth Chambers created this Life Tributes page to make it easy to share your memories.

Send flowers to the Chambers family.