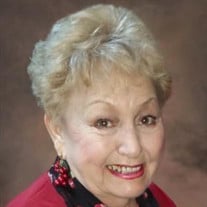 Jo Alice “Jo” Allison, 90, of Alvin, Texas, passed away peacefully in her sleep on February 4, 2022 in Alvin Texas. Jo was born in Blytheville, Arkansas on June 17, 1931 to Carly James Dunning and Gertrude Dunning. She was about 10 when her family moved to Texas. Her daddy heard that he could find work here so they got here as fast as they could. Jo attended school in East Houston until 8th grade. Later on she worked at a grocery store along with her sister, Betty. Jo also drove a catering truck and owned a small fast food place. She was a very good cook and enjoyed sharing her recipes. A few of her other hobbies were fishing, reading and thrift shopping. Jo volunteered at the Alvin Food Pantry for many years. She was a member of Believers Sanctuary when she first moved to Alvin and in the last years she attended Light Christian Center with her family. She loved the Lord with all of her heart and didn’t hesitate to say so. She treasured time spent with family and friends. She would often comment that her favorite times were when everyone was together for Thanksgiving, Christmas and Easter. Family and friends meant the world to her. Jo wanted to be independent and she was. She lived in Alvin Memorial Gardens Senior Living Apartments until she was 90 years old. In the last several months of her life she lived with her daughter Frieda Anderson who lovingly cared for her until she went to be with the Lord. Her smile could light up a room and her laughter was contagious. She will be greatly missed. Jo Alice is preceded by her parents Carly James Dunning and Gertrude Dunning, daughter Linda Sue Cramer, brother Willie Dunning, sisters Jewel Price and Betty Akers Price, son in law Herman Anderson and granddaughter Heather Anderson. She is survived by her sister Peggy Dimmick, children Joyce Sangwin and husband George, daughter Frieda Anderson, daughter Tami Ashworth and husband Duane, sons David Reed Jr. wife DeAnna, and Douglas Reed, grandchildren Lori Galloway, Shawnell Bird, BettyJo Conklin, William Herman Anderson Jr., Crystal LaField, Morgan Ashworth, Benjamin Ashworth, James David Reed and Elizabeth Reed, 20 great grandchildren, 13 great, great grandchildren, and many nieces and nephews. The family would like to express their sincere appreciation to everyone who reached out to them in anyway. They are truly grateful for all of the support and encouragement.

The family of Jo Alice Allison created this Life Tributes page to make it easy to share your memories.

Send flowers to the Allison family.