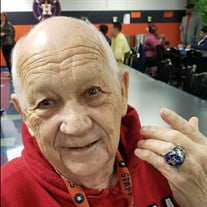 James Lloyd Franklin(85), affectionately known as Pops by his loved ones, passed away Friday, March 27, 2020 in Houston, TX. He was born in Amity, Arkansas on May 20, 1934. James was the third of ten children born to Albert and Jessie Franklin. He married Virginia “Ginny” McKinney in 1955, shortly before he had to leave for the Army. While Lloyd was in the army, Ginny moved to Houston with her family. When Lloyd got out of the Army in 1957, he moved to Houston with her, where they would stay and raise 5 girls. Lloyd was a loving father, grandfather, and great-grandfather that believed his purpose in life was to take care of his family. He worked hard his entire life to take care of those whom he loved. Not only was Lloyd loved and admired by his family, but also by numerous other people he met throughout the years. One place he left his mark was on the softball field. Lloyd helped not only build but also run the Jacinto City Girls Softball Association. In his time with the league, he made an impact on many players and coaches who still hold him dearly in their hearts all these years later. He gave many years of his life to the league, even long after his girls had stopped playing. After retiring from his job of 35 years at Curtin Matheson Scientific, Lloyd went on to the next phase of his life. He went to work for the Houston Astros. In working for the Astros, Lloyd continued to create great friendships and relationships not only with his coworkers, but also with those attending the games. He truly loved working for the Astros for all of those years. He was a true Astros fan, and was so happy to get his World Series ring! When the time came for him to stop working, it was amazing how his presence was truly missed by those that had come to know him at the stadium. James Lloyd Franklin was a man who truly brought joy to the lives of those who knew him. His presence in this world will be missed greatly. He was a person like no other. Lloyd was preceded in death by his wife, Virginia, and seven of his siblings. He is survived by his loving daughters, Sherri Wyont, Terri Mohle, Lisa Shuptrine, Traci Dearing and Kimberly Babbitt; his grandchildren, Mesha, Kyle, Aaron, Michelle, Taylor, Mackenzie, Brandon, Brittni, Brittan, Jesse Ray JR, and Shelby; and great-grandsons, Caiden and Luke. A memorial service will be held at a later date.

James Lloyd Franklin(85), affectionately known as Pops by his loved ones, passed away Friday, March 27, 2020 in Houston, TX. He was born in Amity, Arkansas on May 20, 1934. James was the third of ten children born to Albert and Jessie Franklin.... View Obituary & Service Information

The family of James L. Franklin "Lloyd" created this Life Tributes page to make it easy to share your memories.

James Lloyd Franklin(85), affectionately known as Pops by his...

Send flowers to the Franklin family.