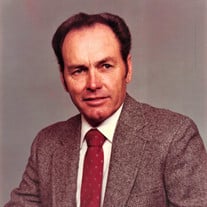 On Friday July 16th, 2021, Jack (John) William Owens, loving husband, father, grandfather and great grandfather passed away at age 87 in Houston, Texas. He was born November 13th, 1933 to John and Elizabeth Owens in Elmira, New York. He married the love of his life, Maudie L. McEachern, on March 5th, 1954 in Channelview, Texas and they celebrated 67 anniversaries together. He was an active member of Memorial Baptist Church. He served in the Air Force from January 7th, 1952 to December 16th, 1955, as a Private 2nd Class Fireman II. He then moved on to Houston Lighting & Power, now known as Centerpoint Energy, and retired after nearly 40 years as a manager over several service centers throughout the Greater Houston area. Jack loved gathering to spend time together with family and playing golf with his good friends. After retiring from HL&P he worked as the Director of Golf and served on the Board of Directors for Texaco Country Club for over 20 years. There he was known for his big smile, kindness, and genuine interest he took in each person and their family that passed through the club's doors. He will be lovingly remembered by his wife Maudie Owens, his daughter Pamela Booker and her husband Larry Booker, his brother Michael Owens and his wife Cathy Owens, his grandson Russell Booker, his granddaughter Rachel Guerra and husband Zac Guerra, and their daughter, his great granddaughter, Gabriella Guerra. He was preceded in death by parents John and Elizabeth Owens, sisters Martha Liatos and Agnes Lacky, and brothers Jimmy and Bernard Owens. Words cannot express how much Jack will be missed by his family and friends, but we are all better and blessed for having had him in our lives. Flowers, cards, and memorial donations to the American Heart Association are all welcome.

The family of Jack (John) William Owens created this Life Tributes page to make it easy to share your memories.

Send flowers to the Owens family.