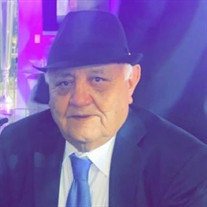 Hugo Gomez Humeda, 73, of Channelview, TX passed away October 10, 2021 in Baytown, TX. He was born October 14, 1947 to Cirillo and Josefina Gomez Humeda in Agujita, Coahuila Mexico. He married Theresa Salinas on May 30, 1978 in Houston, TX.... View Obituary & Service Information

The family of Hugo Gomez Humeda created this Life Tributes page to make it easy to share your memories.