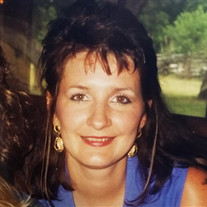 Gloria Jane Whatley Goodson - the devoted mother, supportive wife, cherished sister and loyal friend passed away peacefully in her home on March 12, 2019. Gloria was born in Alexandria, Louisiana on September 21, 1959 to Dossy and Essie Whatley. She was the sweet baby sister to Brenda, Linda, Jimmy and Richard. The family moved to Houston in 1967 where Gloria attended Broadway Baptist High School, graduating in 1978. Upon graduation, she attended Norris of Houston and obtained a Class A Barber License. She started work in busy downtown Houston where she built a stellar client list, many of whom considered her a dear friend. Gloria’s passion for travel started early in her life, in fact one of her trips changed her life completely. In May of 1983, Gloria went with a group of divers to Cozumel, Mexico for Texas Dive week. There she met Steve Goodson, who completely swept her off her feet. On September 3, 1983, after three inseparable months, they married. It was a whirlwind romance which lasted more than 35 years. During the following years, she supported her husband through South Texas College of Law. The young couple moved to Brownsville, TX where Steve started his first job as a maritime attorney and she continued to work in her field. While living in Brownsville, Gloria and Steve welcomed the birth of their daughter, Alaine Breck Goodson, on August 21, 1989. After the birth of Alaine, they moved back to Houston to be closer to family, settling in the Timbergrove neighborhood of the Heights. Gloria continued working, retaining many of the clients that she had before the move. From the school year to the summers, Gloria made sure that her family was organized, completely involved, scheduled and on time. The summers were the best because it meant travel. They traveled all over the United States, many destinations in Canada, Mexico and Europe. Gloria loved it the most when they were together on the road. After Steve was diagnosed with Parkinson’s Disease, they decided to retire and move to San Marcos, TX, to their beloved Hill Country home. It did not take them long to establish roots, making many close friends in this new venture. She enjoyed fishing, golfing and time with family and friends. She was also a frequent volunteer for Meals on Wheels and was involved in church activities throughout her life. She is survived by her daughter, Alaine Goodson, her love Steve Goodson, their spaniel, Patty, her sister Brenda Roark and husband Lindall, her brother James Davis, her niece who was more like a sister, Theresa Cochran and a host of nieces and nephews. She was preceded in death by her father, Dossy Whatley, her mother, Essie Whatley, her sister, Linda Bass, her brother, Richard Davis and her nephew, J.R. Cripps. The visitation will be Monday, March 18, 2019 at Christian Tabernacle Church, 13334 Wallisville Rd., Houston, Texas 77049 from 10:30am-11:30am. The funeral will follow at 11:30am. The burial will take place at 1:00pm at San Jacinto Funeral Home, 14659 East Fwy, Houston, TX 77015.

The family of Gloria Jane Goodson created this Life Tributes page to make it easy to share your memories.

Send flowers to the Goodson family.