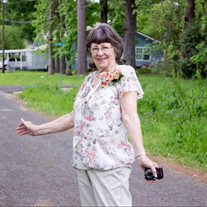 Glenda Dale (Kennedy) Heeth September 14, 1938 to May 6, 2022 Our loving Mother, Grandmother, and Great-Grandmother, Glenda Dale (Kennedy) Heeth peacefully passed away on Friday, May 6, 2022, surrounded by her loving family. Glenda was born on September 14, 1938 to Elwood Kennedy and wife, Margaret (Evans) Kennedy. She received her High School diploma from Galena Park High School in 1957. She then attended a Business School in Downtown Houston. Glenda married Richard Heeth on March 8, 1958. They had three children, Suzanne and husband, Beto Carranza of Atascosita, TX, Catherine and husband, Stan Ackerman of Houston, TX, and Richard Heeth, Jr. and wife, Tammie of Livingston, TX. Glenda was a proud homemaker and doted on her children, always. In 1982, she and husband, Richard, upon retirement from his many businesses, one being a Pawn Shop, moved to Livingston, TX to relax and fish. In June of 1983, her husband, Richard grew bored with retirement and opened another Richard’s Pawn Shop in Downtown Livingston. After Richard’s passing in September of 1983, Glenda became owner and operator until the Pawn Shop was sold in 2007. Glenda was an active member and organist at Peace United Presbyterian Church in Jacinto City, TX until she and Richard retired to Livingston in 1982. Glenda had a passion for sports, especially for her Houston Astros. In High School, she lettered in the high jump and developed a lifelong passion for volleyball. For 40 years she played volleyball with friends and family every week at the Jacinto City Gym. She was very artistic and musically inclined. She loved playing the organ for her family and church family. She also enjoyed playing board games, especially Rummikub and Scrabble with her siblings. She loved nature and enjoyed feeding the many birds and squirrels in her yard. She even fed a feral cat for five years and was very sad when it stopped showing up. Glenda was preceded in death by her father, Elwood, mother, Margaret (Maw), husband, Richard Sr., great-grandson, Emerson (son of Becca and Joe Salazar), sister-in-law, Donna (wife of James Kennedy), and brother-in-law, Hal (husband of Dora Petty). Glenda is survived by her three children, ten grandchildren, Phillip Carranza, Chase Carranza and wife, Megan, Emily and husband, Corbin Paylor, Crystal and husband, Derek Brosky, Tarah and husband, Stacey Childs, David Ackerman and wife, Marissa, Matt Ackerman and wife, Vivian, Stephanie and husband, Grady Reily, Ricky Heeth, and Becca and husband, Joe Salazar. Twelve great-grandchildren, Lillie Belle Carranza, Sarah Blank, Connor Blank, Caleigh Childs, Carter Childs, Jacob Ackerman, Olivia Ackerman, Maddie Reily, Gracie Reily, Lillie Reily, Jon Heeth, and Aaron Heeth. Siblings include Dora Petty of Alvin, TX, James Kennedy of Crosby, TX, and Clifford Kennedy and wife, Carol of Edmond, OK. Pallbearers will be Phillip Carranza, Chase Carranza, David Ackerman, Matt Ackerman, Ricky Heeth, and Jon Heeth. Honorary pallbearers are Connor Blank, Carter Childs, and Aaron Heeth. Visitation and funeral will be held on Thursday, May 12, 2022, at 9:30am, at San Jacinto Funeral Home located at 14659 East Fwy., Houston, TX 77015 in the Chapel. Brief graveside service to follow with a gathering afterwards at Iguana Joe’s (on back patio) located at 5710 East Sam Houston Pkwy North, Houston, TX 77015. The family thanks everyone for their thoughts and prayers. She was and is our EVERYTHING!

The family of Glenda Dale (Kennedy) Heeth created this Life Tributes page to make it easy to share your memories.

Send flowers to the Heeth family.