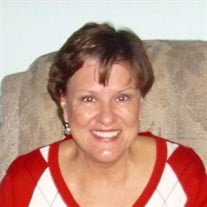 On Monday, October 21st, 2019, Georgia Marie Wilburn Brashier, loving mother of two, passed away peacefully at the age of 71. Georgia was born on August 17, 1948 to Hewey and Marie (Davis) Wilburn. She married William Howard Husband on February 4th, 1972 and raised her daughter, April. She later married Leon Brashier and raised her daughter, Amanda. Georgia loved to travel, but always found her way home. She enjoyed sports and the outdoors. If she wasn’t on the softball field, you could find her in a bowling alley. Later in life, she won games playing pickleball. She was known for her beautiful smile, positive outlook on life, and encouragement to others. Georgia was preceded in death by her father, Hewey, her mother, Marie, her brother, Doug, and her husband, William Husband. She is survived by her daughter, April, and her husband, Richard; her daughter, Amanda, and her husband, James; her brothers, James and Glenn; granddaughters, Bryanna, Maggie, and Ava; and numerous friends and cousins. In lieu of flowers, donations can be sent to: Brookdale Hospice Austin 3636 Executive Center Drive Bldg 8, Ste 210 Austin, Texas 78731

The family of Georgia Marie Brashier created this Life Tributes page to make it easy to share your memories.

Send flowers to the Brashier family.