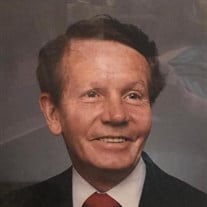 Fred Davis born to Robert McDonald Davis and Etta Mae Davis October 2, 1928. Survived by his loving wife, Patsy Ruth Davis, daughter’s Debra Rohan of California, Annette White of Houston, Texas, Katie Sikorski of Tulsa, Oklahoma and son Steve Davis of Houston, Texas. Grand kids, Marcus Quintanilla of California, Jesse Manrique of Houston, Texas, Wayne Maitland of Beaumont, Texas, Michael Horton of Houston, Texas, Caleb White of Conroe, Texas and Halie Stewart of Conroe, Texas, Christopher Sikorski of Tulsa, Oklahoma, Savannah Sikorski of Tulsa, Oklahoma and Aaron Sikorski of Tulsa, Oklahoma and 14 great grandchildren. He passed away February 9, 2020 at the age of 91. He was tired and wanted to go with the Lord. Fred was a veteran with the United States Navy for 3 year, 11 months and 21 days. He was also a US Army Reserve for 5 years. He was a former lifetime member of Livestock Rodeo, retired after 21 years with Pacific Railroad, 24 years with Anheuser-Busch,10 years of Security and 10 year of Neighborhood Watch. He was the last one of his family living, He said” I am blessed with a loving wife, family, great children, grandchildren and great grandchildren.” He died at home surrounded by his family the way he wanted. Fred also loved his cat Spot #3 who was his constant companion for the last year. He loved to drink his coffee, smoke on his patio and watch his 100’s of DVD’s while the cat slept at his feet. One of his greatest accomplishments was when he was 80 years old he completed his GED. The security company was going to let him go for his age and used the excuse he did not have a GED or High School Diploma and he was not going to allow them to win. So he obtained his GED and in the end the scheduling and his poor eye sight he was forced to quit. Fred lived a great life and had a great run. He will truly be missed by his friends and family and anyone who had the pleasure to know him.

The family of Fred Davis created this Life Tributes page to make it easy to share your memories.

Send flowers to the Davis family.