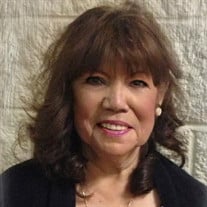 FRANCES H. RUIZ Devoted mother and family matriarch, entered into eternal rest on Wednesday, September 30, 2020 at 11:53 a.m. She was surrounded by all of her children and husband. They laid hands upon her as she peacefully took her last breath. Her grandchildren and sisters were all nearby. Other than being at home, it is how she would have wanted to leave her earthly body. Frances, or Panchita as some called her, was born in Weslaco, Texas, on Thursday, February 6, 1947 to Nicolas and Pascuala Hinojosa. She came to Houston around the age of 6 and it became her endearing home. She married Joaquin Horacio Ruiz on November 15, 1964. They were joyfully married for 24 years before Joaquin entered eternal rest. She had seven children who were reared in Houston and proudly cultured in El Alamo, Nuevo Leon, Mexico. Nineteen grandchildren and two great-grandchildren followed. All were her “Darlings” who she adored tremendously. She was widowed for several years before meeting Gilberto P. Benavides, II. They lived a happy life together for 28 years. Frances was all about family and giving. She truly loved and gave unconditionally. She was an amazing cook. Her specialties include tamales, which everyone expected at Christmastime, her amazing flour tortillas, menudo, caldo, mole, salsa, potato salad, pineapple empanadas, and bunuelos on New Year’s Eve. Her wonderful recipes have been passed on to her daughters and granddaughters. Sunday mornings at her house gave you the special feeling of home. Her home was a place for food, sharing, family gatherings, hugs, loteria, laughter, watching sports, and conversation. She always had a chair for family and friends. She had a giving heart and would extend of her time and thoughtful gifts, however big or small, to family in Mexico and friends everywhere. She was extremely patriotic. Fourth of July was one of her favorite holidays. She would go all out with the decorations. Visiting the White House and the Capitol was definitely something she dreamed of and that dream came true when she visited D.C. Fortunately, she was also able to get an exclusive tour of the Capitol. She also enjoyed a trip to New York City and to the Atlantic City Boardwalk while on that journey. She was affectionately called “Frances de Gold” or “Frances de Oro” by her first husband Joaquin. The name was such an endearment that even after their father passed away, her children continued to call her that. She was definitely a fighter, surviving life without her husband; and she did a great job of raising seven children on her own, with two of them under the age of eight. Frances was preceded in death by her loving husband, Joaquin; parents, Nicolas and Pascuala; in-laws, Ruben and Virginia Ruiz; in-laws, Gilberto and Librada Benavides; several brothers and a sister. She is survived by her children: Ruben and Ludy Ruiz, their children Ruben, Mark, Kimberly; Carolyn and Chris Coronado, their children Lincoln, Abbey, Demi; Joaquin and Yvonne Ruiz, daughters Erika, Ava; Marilyn and Fred Rivas, their children Amanda, Jacob, Evelin, Gabriel, Jonah; Veronica Ruiz, her daughters Alexandria Faith, Sariah Hope; Priscilla Ruiz, her children Isaac, Jiselle Love; Gerald Ruiz, his sons Gerald, Benjamin, Jameson. She is also survived by her husband, Gilberto P. Benavides, II and his children; her great-grandchildren: Penelope Grace Arrieta and Adriel Prieto; and her sisters Mary, Helen, Susie, Isabel, sisters-in-law, and many nieces and nephews. Visitation for Frances will be held at San Jacinto Funeral Home, 14659 East Freeway, Houston, Texas 77015, on Monday, October 5, 2020 beginning at 10:00 a.m., a Rosary at 12:30 p.m., and Liturgy of the Word at 1:00 p.m., and interment at 2:30 p.m. The visitation will be livestreamed on the Funeral Home’s website and the graveside service can be attended virtually at this Zoom link: https://us02web.zoom.us/j/87038166407?pwd=ZWovZURwQXB2QjdIWXFFWFlqYWJTZz09 Meeting ID: 870 3816 6407 Passcode: 072822

FRANCES H. RUIZ Devoted mother and family matriarch, entered into eternal rest on Wednesday, September 30, 2020 at 11:53 a.m. She was surrounded by all of her children and husband. They laid hands upon her as she peacefully took her last breath.... View Obituary & Service Information

The family of Frances H. Ruiz, "Frances de Gold" created this Life Tributes page to make it easy to share your memories.