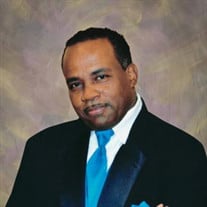 Everald Ricardo Ramsay was a charismatic and outgoing man, enjoying all life had to offer and never wanting to slow down. On December 15, 1955, he entered this world, the union of the late Stanley Ramsay and Ethlyn Pearl Eccles, in St. Catherine, Jamaica. He was the ninth out of thirteen children and grew up in the Seventh Day Church of God. During his formative years, he passed Jamaica's common entrance exam, a national high school entrance test, which many students weren't able to pass. He would proudly talk about how his mother bought him a suit to mark the momentous occasion, which was even more of a feat, since the family really couldn't afford it. He used his intellectual abilities to later become a school teacher in Jamaica and then emigrated to Channelview, Texas to build a life in America with his wife, Angela Ramsay. He continued his education once in America at San Jacinto College. For many years he worked various jobs to support his family. Finally, he settled on starting his own business called Ramsay Courier Express, which gave him the independence to set his own hours. Over the years, his network of friends grew. He was a member and a large part of the Houston Missouri City Domino Club. His zest for life was always palpable. He never shirked from participating in many events, attending numerous celebrations by friends and family members. Everald is survived by his wife, Angela of 37 years, daughters Vanessa and son-in-law Kevin Grenyion, Michelle and son-in-law Ronald Coleman Jr., son Sean and daughter-in-law Jessica Ramsay, grandchildren Makayla, Mya, Gifton, Joshua, Saniya and Samson, sisters Lurline Lee, Barbara White, Lamore Ramsay, brothers Roderick Stevenson, Dunstan Rattigan, Avard Rattigan, Osborne Rattigan, mother-in-law D.S.Clarke and many nieces, nephews, and cousins. Everald is predeceased by his parents, sister Marvalee Rattigan, brother Anthony Ramsay and sisters Beryl Ramsay, Cynthia Ramsay . He will be surely missed by everyone.

Everald Ricardo Ramsay was a charismatic and outgoing man, enjoying all life had to offer and never wanting to slow down. On December 15, 1955, he entered this world, the union of the late Stanley Ramsay and Ethlyn Pearl Eccles, in St. Catherine,... View Obituary & Service Information

The family of Everald Ricardo Ramsay created this Life Tributes page to make it easy to share your memories.

Everald Ricardo Ramsay was a charismatic and outgoing man, enjoying...

Send flowers to the Ramsay family.