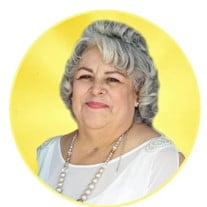 It is with great sadness that the family of Esmeralda M. Ramirez (Cissie) announces her sudden passing on Saturday, March 20, 2021 at the age of 69 joining her mother Esperanza Renteria and father Epifanio Renteria, brothers Johnnie Renteria and Louis Renteria and great grandson Vinny Melendrez in the Kingdom of Heaven. She will be lovingly remembered by her husband of 43 years Hermilo Ramirez as well as her three children Rosalva Renteria, Nicholas Ramirez, Brenda Ramirez, and five grandchildren Esteban Saldana, Joanna Saldana, Justin Saldana, Ava Ramirez and Nathanial Musquiz and three siblings Gary Renteria, Michael Renteria and Linda Gerardo. Esmeralda worked for HISD for over 29 years primarily as a secretary at Port Houston Elementary and J.R. Harris Elementary and later as a clerk with the Southeast administration building retiring in 2006. She later came out of retirement to work part time for the Harris County Clerk’s election department from 2016-2019 as a Spanish bilingual clerk, and also as an election judge in various precincts. In 2019 she became a call center clerk for the Harris County election department until she transitioned to the Lord. She was an active member at St. Dominic’s Catholic Church and a member of the Legion of Mary since 1996. She has impacted the lives of many with her Christian acts of work with the Legion of Mary and strong encouragement to get out and vote often using the catch phrase “Your vote is your voice,” after having worked with the election department. She had more of a social life for her age then most, always attending mass, evangelizing at nursing homes, visiting the sick, attending funeral homes to assist with the rosary, assisted RCIA children’s ministry, door knocking, etc... If she wasn’t with the Legion of Mary she would be working with the county office which she was extremely proud of her civic duty. In her down time she would make rosaries out of simple beads and rope which were given to many people around the city if not around the world to help evangelize the power of prayer through the intercession of the Blessed Virgin Mary. She loved and spoiled the people around her in her motherly known way. Although she referred to herself as “non-tech savvy” she managed to create a personalized bitmoji that she would send with her daily text messages, used her social media platform to spread the word or to send friendly reminders about voter registration and election dates. Daily alarms were placed on her phone as a reminder to stop and pray the Angelus prayer at noon and the Devine Mercy at 3:00 pm. She also introduced many to EWTN the Global Catholic Television Network and encouraged donations to support their efforts. She will forever be remembered by making the holidays extra special by randomly sending text messages, letting us know when the Charlie brown specials were televised or when Sunny 99.1 started playing Christmas music. She diffidently found and served her purpose in life as a soldier of the Virgin Mary and will be dearly missed. Services will be held at St. Dominic’s Catholic Church, 8215 Reservoir St., Houston, TX 77049 Friday, April 23, 2021. A rosary will be held at 3:30 pm followed by a mass at 4:00pm. Please be prepared to arrive few minutes prior to services for a temperature check and masks will need to be worn. Any donations for funeral or living expenses are welcomed and greatly appreciated in person or through zelle [email protected] .

It is with great sadness that the family of Esmeralda M. Ramirez (Cissie) announces her sudden passing on Saturday, March 20, 2021 at the age of 69 joining her mother Esperanza Renteria and father Epifanio Renteria, brothers Johnnie Renteria... View Obituary & Service Information

The family of Esmeralda Maria Ramirez created this Life Tributes page to make it easy to share your memories.

It is with great sadness that the family of Esmeralda M. Ramirez...

Send flowers to the Ramirez family.