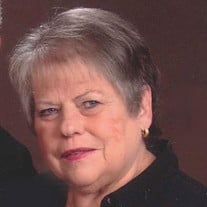 In Loving Memory Of Donna Lynn Latour Donna Latour, age 67 of Houston, Texas passed away peacefully on Monday August 17th, 2020 at Memorial Hermann Southeast hospital in Houston. Donna was born February 12, 1953 in Pasadena to Buel and Nell Turner. She grew up in the east Houston area having gone to Galena Park High School. She lived in the east Houston area her entire life. Nearly all her family lived in the surrounding area and Donna wanted to always remain close to her family. Donna’s family meant everything to her. Donna met Charles at the young age of 14 and they eloped and married three years later; April 10, 1970. The two were inseparable throughout their lives having had their 50th wedding anniversary this year on April 10, 2020. During their lives together they had one son Clay and one daughter Brandy who gave them five grandsons. Donna spent many years being a homemaker while her kids were young performing the hardest and most important job of being a mom. She later gained employment in the school district and worked a career within the Galena Park School District from which she retired. Most importantly, Donna enjoyed family gatherings and events, especially birthdays and holidays. She also had a love for the outdoors and going camping with her family. She and her family took many vacation camping trips across the United States and camped all over Texas throughout the years. Before her health conditions made it impossible, Donna loved to have weekend family gatherings and outings, Sunday Church and Sunday family meals which were nearly every weekend. Donna loved to work outside in her yard and flower beds. She was also very talented at arts and crafts and making and painting ornamental decorations. Donna also had a talent for making beautiful birthday and wedding cakes. She loved sewing and making quilts, blankets and proudly made baby blankets for all her grandchildren. Most of all, Donna enjoyed being with her grandchildren. Nothing would make her happier and her eyes light up more than being around her grandbabies. Donna became a member of St. Andrews Catholic Church in 2012 as she wanted to be more involved in her religious beliefs. After becoming a member of the church, Donna felt it was very important for her to be baptized and become a devoted follower of Christ. Donna pursued her beliefs and was proudly baptized in April 2012. Donna is preceded in death by her father Buel Turner. She is survived by her lifelong love and husband of 50 years, Charles; Mother Nell (Granny) Turner; son Clay; daughter Brandy and husband Jeremy Whistler; brothers Jerry Turner and wife Millie; and Dale Turner and wife Nancy; sister Kay Evans; grandsons Mason, Bryce, Charlie, Chase and Colby; and many wonderful nieces and nephews in which she loved dearly. A celebration of her life will be held at 9:00 am on Monday August 24th at San Jacinto Funeral Home and Memorial Park, 14659 East Fwy, Houston, Tx 77015. Due to COVID 19 risks, only 50 family members and friends are allowed to the viewing and service inside the funeral home. The graveside service starts at 2:30 and unlimited friends and family are welcome to give their final respects to Donna Latour. Pallbearers: Mason Latour, Bryce Latour, Charlie Whistler, Jeromey Turner, Mark Turner and Jason Evans Honorary Pallbearers: Chase Whistler and Colby Whistler

The family of Donna Lynn Latour created this Life Tributes page to make it easy to share your memories.

Send flowers to the Latour family.