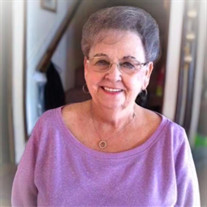 Donna Hewitt Gough October 16, 1935 - November 12, 2021 "The Death of a mother is the first sorrow wept without her" Donna Hewitt Gough, 86 years old, a resident of Houston, TX passed away peacefully on November 12, 2021. She entered this world on October 16, 1935, born to Joseph and Mabel Hewitt, in Sioux City, Iowa. Donna loved to entertain and cook for family and friends. She loved painting, crafts, and ceramics for which she won many medals. It was dancing however, that gave her the greatest joy, and it was that love for dancing which brought her to the one true love of her life at a USO dance in Sioux City. On October 8, 1955 she married Charles "Don" Gough, together they loved and raised three children. There were two things she was most passionate about, both of them untouchable, her children and her hair, and to this day we are still unsure which was more important. She and Don were both jokesters and pranksters, sometimes together and sometimes on each other. After retirement, Donna followed Don on the country music opry circuit where she was his biggest fan (and often his toughest critic). She is survived by her Daughter Dawn Harriman-Pounds, sons Kevin Gough and his wife Jan, and Derrick Gough and his wife Frances all of Houston, TX, Seven grandchildren; Donna Parisi, Abby Gough, Kevin Gough Jr., Timothy Gough and his wife Lindsey, Amber Roberts and her husband Donnie, Jessica Langlois and her husband Tommy and Dara Aviles and her husband Kenny, Six great grandchildren; Stevie Roberts, Wyatt and Memphis Gough, Sebastian Aviles, Jackson Langlois and Jennifer Parisi, One great great grandchild; Caylix Parisi and a host of other family and friends. She is preceded in death by her loving husband Don, her brother Darrell Hewitt and her parents Joseph and Mabel Hewitt.

The family of Donna Hewitt Gough created this Life Tributes page to make it easy to share your memories.

Send flowers to the Gough family.