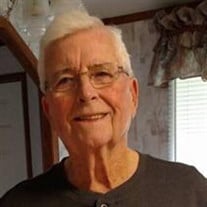 Don L Rudolph was born on November 21, 1934 to Elbert and Leila Rudolph. He was the 3rd of their 4 children, and he was born in Fort Worth, Texas. When he was in his teenage years, his family moved to Houston, Texas. He lived in Fort Worth, Sheldon (Houston) and Marquez - all in Texas. He attended school until the 9th grade. Upon completing school, he joined the family business driving a truck, which he did for many years. Once his children were born he tired of being on the road away from home and began his career at P&S Rice Mill. He was a supervisor there and worked many years. After his employment with P&S Rice Mill ended, he returned to truck driving again. His final job was contract work at Lyondell – once again driving a truck. He married the love of his life, Mary Anne Beauchamp, on June 1, 1957 at Second Baptist Church in Jacinto City, Texas, alongside their lifelong best friends, Melvin and Doris Parker, in a double ring ceremony. After retirement, they moved to Marquez, Texas to live near their best friends, Melvin and Doris Parker. After moving to the country, Don L and Melvin lost their wives. They remained very close and helped take care of each other until Melvin’s passing in 2016. The most significant events of Don’s life were his marriage to his beloved wife Anne, the birth of his two children and his two grandchildren, and the birth of his great grandson. He loved to work, and even after retirement he loved staying busy and being outdoors. He enjoyed hanging out with his buddies J.R. and Alan in the country, drinking beer and shooting guns. Don L was hard working, kind, honest, fun and very loving. He enjoyed fishing, especially with his son and grandson. He loved airplanes and enjoyed collecting guns and knives. He is preceded in death by his beloved wife Mary Anne, parents Elbert and Leila Rudolph, brother Robert Lee Rudolph, sister Elbreta Christenson, nephew Roy Don Davis and beloved cat Sobe. He is survived by his son Tim Rudolph and wife Cheryl, daughter Cindy Rudolph, granddaughter Katie Anne Nelson and husband Mitchel, grandson Matthew and fiancé Stephanie, brother Gary Tom, niece Anita Dytuco and husband Vergel, niece Karen Johnson and husband Ron, and 3 great-grandchildren, Adelyn, Noah James and Baby Rudolph due December 2019. Don L - also remembered as Dad, Donnie Boy and PawPaw - will be greatly missed. He had a wonderful sense of humor and loved teasing. He was a lot of fun to be around and would help anyone in need. Saying he would “help” is an understatement; he would actually take over the project until it was done the way he wanted it done! We know he’s reunited with the many loved ones he's lost over the years.

Don L Rudolph was born on November 21, 1934 to Elbert and Leila Rudolph. He was the 3rd of their 4 children, and he was born in Fort Worth, Texas. When he was in his teenage years, his family moved to Houston, Texas. He lived in Fort Worth,... View Obituary & Service Information

The family of Don L. Rudolph created this Life Tributes page to make it easy to share your memories.

Send flowers to the Rudolph family.