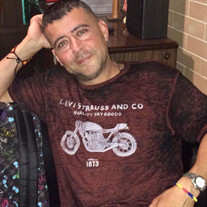 Carlos Alvarez – loving father, son, and brother – passed away on Thursday, March 25, 2021 in Mercedes, TX, at the age of 54. He was born on November 21, 1966 in Medellin, Colombia. Carlos is survived by his son Cristian Jesus Alvarez; mother and step-father, Consuelo and Rex Smith; father and step-mother, Marceliano and Cristina Alvarez; sister and husband, Claudia and Darayus Pardivala; sister and husband, Monica Alvarez and Henry Vargas; brothers Marcelo and Daniel Alvarez; and nieces, Natalie Herrin, Nina Cervantes, Daisy Cervantes, and Michelle Pardivala. He left behind two courageous and obedient Rottweilers, Green and Girl. Carlos married Maria Alvarez in La Feria, Texas and together they raised Cristian. He enjoyed many family vacations, such as Puerto Rico, Disney World, Red River, Cancun, and Washington, as well as countless road trips with Cristian to visit the “Cousin Club” in Houston. Also known as “Docdoe/Daydoe,” Carlos was gregarious, charismatic, and loved children, especially his nieces and cousins. Silly, boisterous, and fun-loving, Carlos was the life of the party, lighting up the room with his contagious smile and larger-than-life personality. He was always willing to help others, strangers and friends alike. A Colombian patriot, he visited his motherland often, where he made many lasting friendships. Carlos had an eclectic taste in music and frequently attended concerts including Shakira, Van Halen, The Cure, U2, AC/DC, and Eminem to name a few. A die-hard sports fan, he supported the Rockets, Texans, Astros, and Yankees. “Docdoe, Daydoe.” – Carlos The family would like to thank everyone for the thoughtful expressions of sympathy and condolences during this difficult time, and will receive friends on Friday, April 2, 2021 from 4-7 PM at San Jacinto Funeral Home for a celebration of his life. The service will be held on Saturday, April 3, 2021 at 10 AM at San Jacinto Chapel followed by interment at San Jacinto Cemetery.

The family of Carlos "Docdoe/Daydoe" Alvarez created this Life Tributes page to make it easy to share your memories.

Send flowers to the Alvarez family.