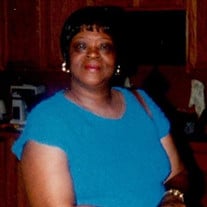 Bessie Dolores Perkins went home to be with the Lord on the morning of February 25, 2020. Bessie was a retired educator, born on February 15,1943 in Houston, Texas to John Murphy Brown Sr. and Novella Davenport-Brown. The union between John Murphy Brown Sr. and Novella Davenport-Brown was dissolved and Bessie was raised by her mother and step-father Y.Z. Smith. Bess, as she was affectionately known, accepted Christ and was baptized at an early age at Greater Mount Olive MBC under the pasturage of the late reverend L.P. Pointer. Later in life she converted to Lutheranism attending Augustana Lutheran Church under the pasturage of Walter Little where she served on the Alter Guild and was active in Sunday School until illness prevented her from doing so. Educated in the Houston Independent School District, Bess continued her education graduating from Phyllis Wheatley High School in 1961, where she was active in the school band playing the drums and voted Miss Congeniality. She then began her professional career at Methodist hospital and later relocated to Lubbock, Texas where she met her husband Herbert Perkins and in this union they raised a daughter Crystal June. Bess and her family relocated to Denver, Colorado where she completed her college education obtaining her Bachelor of Arts degree in Education from the University of Colorado and began her career in the Denver Public School system. In 1981 she relocated back home to Houston while continuing her career in education at Houston Community College for twenty plus years and later retiring from the Galena Park School District. Bess was proceeded in death by her parents John Murphy Brown Sr., Novella and Y.Z. Smith, her brothers John Murphy Brown Jr, Glen Otis Smith and Nathaniel Smith. She is survived by her loving and devoted daughter Crystal (Craig Bonner, Sr.), her two beloved grandchildren Teylor Brooke and Craig Anthony Jr, her dear sister Vivian Ann (George Steed), brothers Ben (Doris Smith) and David and her loving cousins, nieces, nephews and numerous other relatives and friends.

Bessie Dolores Perkins went home to be with the Lord on the morning of February 25, 2020. Bessie was a retired educator, born on February 15,1943 in Houston, Texas to John Murphy Brown Sr. and Novella Davenport-Brown. The union between John... View Obituary & Service Information

The family of Bessie Deloris Perkins created this Life Tributes page to make it easy to share your memories.

Bessie Dolores Perkins went home to be with the Lord on the morning...

Send flowers to the Perkins family.