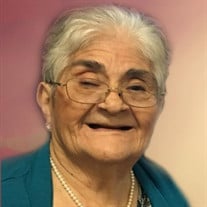 Bertha Hinson, age 82, of Fort Walton Beach, FL, passed away on February 28, 2019. She was born on April 22, 1936 in Talara, Peru. She moved to Channelview, TX in 1968, where she lived until she moved to Florida in 1997. She spent her time in Texas actively involved in the Peruvian consulate welcome committees and cultural activities as well as Saint Andrew Parish. Bertha was the dedicated matriarch of her extended family and was respected by everyone who knew her. She spent her life helping those around her while raising her daughter following the death of her husband. She moved to Florida to be close to her grandchildren and shower them with love and support. She is preceded in death by her parents Luis Roble Zapata and Mercedes Aleman de Roble; her husband, Wallace Hinson, and her brothers Raul and Ruperto Roble. Bertha is survived by her daughter, Mery Hinson Wise and her son-in-law, James Wise; her granddaughter Alyssa Wise; her grandson, Austin Wise; and siblings Irma, Ricardo, Socorro, Guillermo, and Luis, as well as, numerous nieces and nephews. If people would like to honor her spirit of always helping others, in lieu of flowers, memorial contributions may be made in her name to Catholics Charities. An internment will be held at San Jacinto Memorial Park in Houston, TX at 1:00 PM on Saturday, March 16, 2019 where she will be laid to rest next to her late husband.

The family of Bertha Hinson created this Life Tributes page to make it easy to share your memories.

Send flowers to the Hinson family.