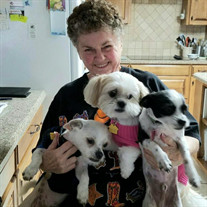 Barbara G. Cooper June 30, 1936 – July 5, 2021 Barbara Gail Cooper was born in Seattle, WA to Maurice and Olive Stoneburg, joining her elder sister, Jacquelyn Maureen to complete the little family. Barbara attended Roosevelt High School and planned to go to the University of Washington on a music scholarship. After watching the Women’s Air Force (WAF) band perform at Seattle’s Seafair Parade, she auditioned on her flute and piccolo, winning a place in the band. Barbara was stationed in San Antonio, Texas (1954-1956) in the Air Force where she enjoyed her music and followed her dream of traveling. She met her husband, Robert Winn (Bob), who also played flute in the Men’s Air Force Band. They were married December 3, 1956 in Lackland, Texas. Barbara and Bob settled in Houston, Texas where Barbara worked for Dresser Industries for 33 years. On August 28 ,1993, Barbara married Cecil Cooper in Houston, Texas after losing Bob to cancer. Barbara and Cecil traveled abroad, enjoyed fishing, attending church at The River, volunteering to walk dogs at a shelter and socializing together with family and friends. Barbara’s interests included boating, working on puzzles, fishing, gambling, and accompanying her many friends on various adventures. She enjoyed baking cookies for many people and loved watching the Houston Astros. She brought much joy, laughter, and a smile to those around her. Barbara entered the gates of heaven at the age of 85 with her family surrounding her. She will be greatly missed by everyone who called her a friend or considered her family. Barbara is survived by her son, Blake Cooper, (BJ), niece, Charlene Thompson (Mark), niece, Teresa Winn -True (Dale), 2 grandchildren, 2 great-grandchildren, 2 great-nieces, 1 great-nephew, 3 great-great nieces and 1 great-great nephew. She is preceded in death by her parents, Maurice and Olive Stoneburg, husband, Robert Winn, husband, Cecil Cooper and sister, Jacquelyn Arnold. Memorials can be made to SNAP Animal in Pasadena, Texas.

The family of Barbara Gail Cooper created this Life Tributes page to make it easy to share your memories.

Send flowers to the Cooper family.