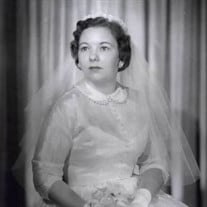 Barbara Hunt Adams, 84, passed away peacefully at her home in Houston, Texas on Wednesday, Nov. 21, 2018. She was born on Mar. 24, 1934 in Atlanta, Georgia and later lived in Texas and Shreveport, Louisiana. She was the daughter of Lynn Milton and Velma Hester Hunt and was the second of two children. She attended Fair Park College Prep High School in Shreveport and following graduation earned a Bachelor’s degree in home economics at Louisiana Tech University. She began her career as a home economist for Texas Gas before marrying and starting her family with Lee Adams, an Episcopal priest, on May 6, 1957 at Christ Episcopal Church in San Antonio. She could be found by his side at the numerous churches he was called to lead. She has lived in the Houston area from 1975 to the present, when she came with her husband to pastor All Saints Episcopal in Galena Park. Barbara always loved to sing. As an eighth grader, she sang in the Girl’s Glee Club. At the age of 16, a new mission church was birthed on her side of town, in Shreveport, and she began to sing in the choir there. It would be the first of many years of service to God in the choir where she faithfully sang at each of the churches where her husband was priest. She has been a member of the choirs at St. Matthias is Shreveport, LA, St. Matthew’s in Kenedy, TX, Calvary in Menard, TX, St. Phillip’s in Beevile, TX, Church of the Heavenly Rest in Abilene, TX, St. John’s in West Point, GA, All Saints in Galena Park, TX, and lastly at St. Timothy’s Episcopal Church in Houston. Her devotion to music as a member of the soprano section has resulted in more than 68 years of music for God. She was also active in numerous Bible studies, a member of the Order of the Daughters of the King whose rule of life was service and prayer and served on the Altar Guild. Outside of church work, her passion was quilting, and she leaves a legacy of work behind for her loved ones. She was a member of the Crosby and Dayton Quilt Guilds and the Ladybug Decorative Painting Group. She called the births of her children and grandchildren among the paramount experiences of her life. She was a loyal and enthusiastic baseball fan and was excited to watch the Houston Astros win the World Series in 2017. She enjoyed cooking and rarely came to church functions without a casserole dish or food of some kind. She also loved roses, pink being her favorite, and grew them at her home. In addition to church music, she also enjoyed big band music and her favorite crooner was Frank Sinatra. She is preceded in death by her husband, Lee Mariner Adams; her son, Stephen Matthew Adams; her daughter, Nancy Adams Dawlearn; and her sister, Mary Lynn Hunt Buckner. She is survived by three daughters, Judy Adams Johnson and her husband Larry; Susie Adams; and Diana Lynn Adams Nichols and her husband Don. She also leaves behind her beloved grandchildren, Sheridan Johnson, Lucas Johnson, and Noah Dawlearn and cherished friends Jody and Kathy Seydler, Ruth Crook, David Taylor, Patti Gaspard and Lois Cooper. Pallbearers for the service are Larry Johnson, Lucas Johnson, Noah Dawlearn, Mark Hegman, David Dawlearn, Don Nichols, Jody Seydler, and Albert Seydler. Visitation is on the Tuesday, Nov. 27, 2018 at San Jacinto Funeral Home, 14659 East Freeway (I-10) in Houston from 4:30 to 8:00p.m. The Celebration of Life will be on Wednesday, Nov. 28, 2018 at St. Timothy’s Episcopal Church, 13125 Indianapolis, Houston, TX 77015 at 10:00a.m. Interment will be at San Jacinto Memorial Park Cemetery at 14659 East Freeway (I-10) in Houston. There will be a light reception at St. Timothy’s following the burial. The family requests in lieu of flowers, that donations be made to the general fund of St. Timothy’s Episcopal Church.

Barbara Hunt Adams, 84, passed away peacefully at her home in Houston, Texas on Wednesday, Nov. 21, 2018. She was born on Mar. 24, 1934 in Atlanta, Georgia and later lived in Texas and Shreveport, Louisiana. She was the daughter of Lynn Milton... View Obituary & Service Information

The family of Mrs. Barbara Rhea Hunt Adams created this Life Tributes page to make it easy to share your memories.

Barbara Hunt Adams, 84, passed away peacefully at her home in...

Send flowers to the Adams family.